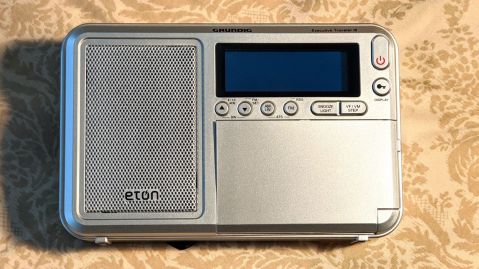 No, this is not gobbledygook. It makes eminent sense. I wanted a radio whose quality was akin to that of a legendary ‘Grundig’, but I was happy if it wasn’t German! I do my best to avoid German products — especially bloody German cars. Why? Very simple. Others may have, BUT I have yet to forgive them for BOMBING my beloved England. Yep. Yes, the Japanese bombed Ceylon once — but, as far as I am concerned, WE the Allies exacted our retribution on them. Anywho … I am just glad that I was able to get an American designed, Chinese built radio that is purpoted to be as good as a Grundig — without it actually being a Grundig.

Growing up in Ceylon, before I witnessed, with my own two-eyes the damage that the bloody Germans had wreaked on Liverpool, I was into Grundig radios — both desktop and portable. We didn’t have TV. Just radio. Though there was a paucity of imported goods we did have a smattering of Grundigs. Grundigs were good.

I had NO idea that Grundig had gone ‘kaput’ in 2003. I didn’t realize that German companies went kaput. Well they did. ‘Grundig’ is now just a brand name used by others.

Eton has bought the U.S. rights for the name. The radio is not German. It is not bad. I have only used it for less than 30-minutes, but so far, so good.

For the last 10-months I have started listening to the radio during my 2-hours a day of walking/light jogging. Helps me deal with the time.

A German car and a Dutch auctioneer. I know the Dutch have a long, storied history when it comes to auctioneering BUT how do you end up with one that even his OWN PEOPLE can’t understand.

This was a multi-million dollar question. Nobody at Sotheby’s was paying attention? This is crazy.

But, I class it as ‘Instant Karma‘. German cars give you that. Trust me on this.

Do NOT Get Your Son A Kraut BMW IF He Is SMART Enough To Want A JAGUAR.

The video that accompanies story.

Use above link to see the video.

I am SO, SO, SO PROUD of this young man. He is going to go far. He has discernment, courage and chutzpah.

I would be PROUD to have him as a son, though I would NEVER, EVER insult my kids by buying them a lousy German car, even if I had to sell a kidney to buy a Jaguar.

Jaguar should give this young man a new car for FREE. This was quite the statement.

It does NOT happen often, but every once in awhile an Indian shows that they have tremendous good tastes.

My New eBay Listings Are So, So PRO-U.S. That Trump Will Be Proud!

My choice. It is true that I have had some real good sales to Canadians. But, I am eliminating them too, my regret, just to make sure no bloody Germans bid on any of my stuff. Just so fed up of being screwed by the Germans.

A Bloody German Screws Me Again — This Time On eBay.

So, after a 7-day auction, and eBay will charge me EVEN THOUGH it is now UNSOLD, I am back to square bloody one.

To claim that they did NOT know the price is typical. Always bloody excuses.

In all future listings I am going to say, in BOLD, “NO GERMAN BIDDERS“.

I have a LONG history of Germans getting my goat.

I even had a German get on my DOCKED boat and take pictures. Get in someones docked boat! Jesus. Only Germans.

The New ‘Bentley Flying Spur’ Is Quite Spectacular, But As Far As I Am Concerned It Is a German VW!

It breaks my heart, these once GLORIOUS British companies now under German or Indian ownership. Bentley part of VW and my BELOVED Jaguars part of Indian Tata Motors.

This new ‘Flying Spur’, like all Bentleys, is near magical in its presence and gorgeousness — BUT it is no longer ICONICALLY British. Aaahhh! Why or why? Why did we let this happen.

Yes, I salivated over it, not that I would ever pay that kind of money for a car. But, an old Bentley, when it was still a British Bentley, might still be on the cards at some point. SMILE.

Just wanted to share with you and also express my distress as to what has happened to Dear Bentley.

Not much I can add. A solemn day in the end. Day to reflect, a day to give thanks — that we are speaking English rather than German.

Please check ALL the ‘D-Day‘ and ‘Red Poppy‘ posts on this blog. The search box is on the sidebar. In those days I covered much.