An Ongoing Tribute To ‘Poppy Day’

Most images will ENLARGE when clicked.
Do a search for ‘Poppy‘ for blog posts >>>> 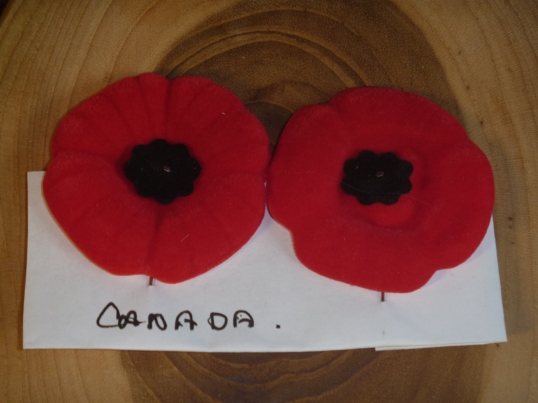 It is always observed on November 11, without exception since that was Armistice Day — the day, in 1918, the armistice [i.e., truce] was signed the Allies [i.e., US the good guys] and Germany, at Compiègne, France, to bring to an end World War I [1914 to 1918], which involved over 70 million troops and had killed more than 9 million combatants.

The poppies symbolize those that grew in profusion across some of the worst battlefields. [Think of French Claude Monet’s ‘Poppies Blooming’ painted in 1873.]

A Canadian physician, Lieutenant Colonel John McCrae, who was serving in WW I,wrote a poem, in 1915, called ‘In Flanders Fields‘, after attending the funeral of a fellow soldier [‘Flanders‘ being a region in northern Europe in which there was heavy fighting]. The first verse of it went:

In Flanders fields the poppies blow

Between the crosses, row on row,

That mark our place; and in the sky

Scarce heard amid the guns below. An autographed copy of the poem that gives us this lovely tradition.

Inscription of the complete poem in a bronze “book” at the John McCrae memorial at his birthplace in Guelph, Ontario, Canada. George Edward Honey’s suggestion of a few minutes of silence

Plaque in memory of Australian Edward George Honey in “Kings Domain”, Birdwood Avenue, City of Melbourne, Down Under.

On May 8, 1919, a letter to the editor signed ‘Warren Foster’ appears in London Evening News proposing the first anniversary of the armistice ending World War I 1918 November 11th, be commemorated by several moments of silence.

The author, actually an Australian journalist named George Edward Honey, living in London (U.K.), after being invalided out of the in the British army with a leg injury, was concerned about the huge celebrations on the streets on “Victory Day” 1918.

He suggested a silent commemoration of the sacrifices made and the lives lost during the war would be a far more appropriate way to mark the first anniversary of its end – the first “Armistice Day” in 1919.

Placement of the above plaque.

“Five little minutes only, silent minutes of national remembrance.  A very sacred intercession. Communion with the Glorious Dead who won us peace, and from the communion new strength, hope and faith in the morrow. Church services, too, if you will, but in the street, the home, the theatre, anywhere, indeed, where Englishmen and their women chance to be, surely in this five minutes of bitter-sweet silence there will be service enough.”

Honey’s letter did not immediately bring about a change but a similar suggestion was made to Sir Percy Fitzpatrick that October, reaching King George V, who on November 7, 1919, made an official proclamation, practicality setting it as a 2 minute period of silence (as opposed to ‘5’), beginning with the first stroke of the hour of 11 am November 11th across the Empire.

We today are used to gatherings at local cenotaphs but most weren’t up yet in 1919. These monuments seem to have killed the brilliant idea of a stoppage in ordinary places to reflect individually, no dignitaries and school children and old guys having photo ops.

Nancy’s transcript of the King’s proclamation. Scanned image cope she sent to me. Click to ENLARGE.

From a contributor from Ontario, Canada.

The above plaque hangs in the lobby of the Prince Arthur Hotel in the city of Thunder Bay, Ontario, the amalgamation of twin cities Fort William and Port Arthur in 1970.

Mme. Anna Guerin, wife of a French jurist and founder of a Paris war orphanage reached out to North American for financial support. She was aware of Canadians’ strong association between the Flanders poppy and their heavy overseas losses, their “fallen” soldiers, since late December 1915 when an little poem “In Flanders Fields” appeared anonymously in England’s popular periodical ‘Punch‘.

This turned out to be authored by an Ontario physician army officer, composed that May while contemplating the fresh grave of friend, which later was sent to England by a fellow officer.

As she wrapped up her charitable fundraising, in 1921 Mme. Guerin brought out French-made cloth replicas of the wildflower and, with the encouragement of Canada’s first ‘returned soldiers’ association [see plaque] and public support asked government to recognize it and ask citizens everywhere to wear one on November 11 that year. Recently with our own Tomb of the Unknown Soldier in Ottawa, the custom has arisen spontaneously of placing one’s poppy on the sculpture, a blanket of funeral-like flowers. A moving sight.

The first Armistice Day in the Empire, 1918, was an occasion of celebration and thanksgiving for victory. But in 1919 King George V asked his subjects everywhere to pause just where they were, to stop all traffic, and to observe two minute of silence at the stroke of 11 am in remembrance of those who did not come back. This tradition makes it a solemn day, remembering our many losses, the families they left behind, while former military “vets” join civilians recalling lost comrades.

The Queen, Poppy Day 2012 showing how it is carried off with pomp.

From zimbio.com. Click image to ENLARGE. Use link below to access original at zimbio.com. Many thanks to zimbio. 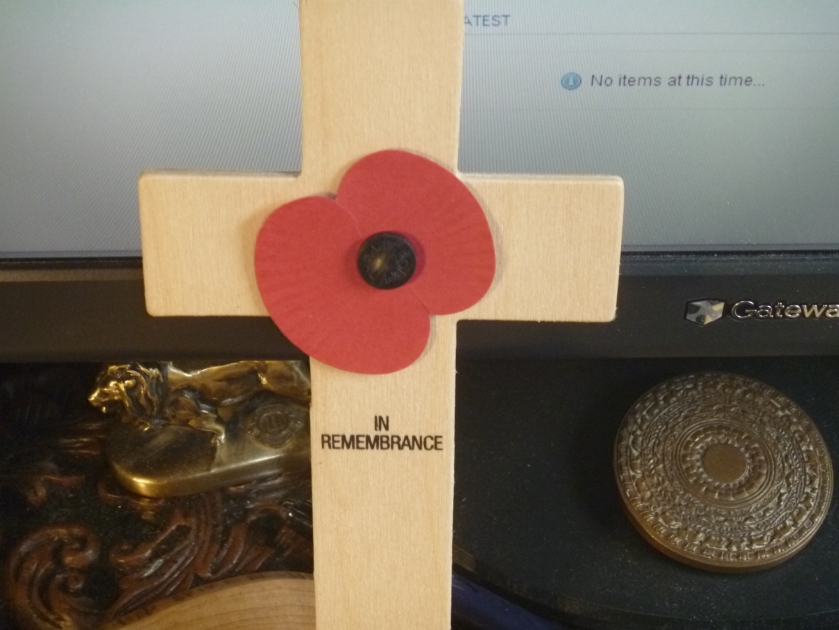 A very detailed and well presente history from the U.K.
‘Great War’ Website. A must read.

Remembrance Day — Poppy Day Traditions and Pictures from Around The World.

2/ The Tower of London poppies