Current Pricing At Amazon; $279 for the ugly models.

All because the Slate — Gunmetal is still back-ordered!

There will be hell to pay if I don’t and I have informed Amazon of that.

And at Garmin. This is a pretty POOR show on their part.

Garmin appears to have screwed-up pretty badly — in making the Slate/Gunmetal version available.

It appears that 2 or 3 New York “Time Square” camera shops got a FEW units early. But, I don’t trust any of these places.

That Amazon did NOT get a shipment as yet is SCARY.

Amazing that they are discounting the Vivoactive 3 already — within a couple of weeks of availability. This discount has trickled down to all the other Garmin products too — as would have to be the case. Glad I am NOT a Garmin shareholder.

It is available 5-days sooner
from an Amazon seller (but NOT Amazon)!

The question I have is “The Play Better Store” Garmin using an alias.

I called their phone number. Closed for the day. I sent them an e-mail.

IF it is Garmin, I will go ahead and place order. 5-days is a lifetime!

That store is very Garmin heavy. Just the first few items they list …

Click to ENLARGE and marvel here. Check Amazon IF you don’t believe me.

Two days after they took down the listing for the Gunmetal Black (i.e., Slate) it is BACK AGAIN!

Now they are stating a Tuesday, November 14, 2017 availability — in stock. Last week I had seen November 11.

No, I have NOT pre-ordered one again. I will wait a few days.

I will, of course, keep you CLOSELY posted. I have skin in this game — for sure, for sure.

I Returned The Garmin Forerunner 235 After Just 4-Hours On My Wrist! 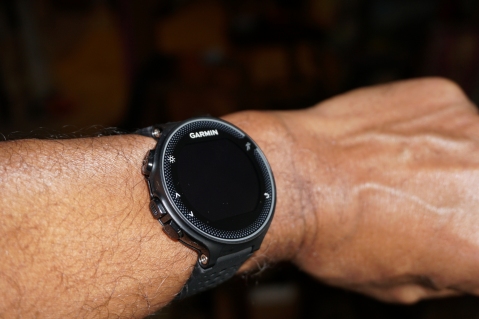 It arrived around 2:30pm yesterday, November 6, 2017, via USPS. I plugged it in to be charged and registered it via Garmin Express.

I did NOT get around to putting it on my wrist, with it turned ON (and working), till around 8pm.

It is a NICE WATCH. Extremely light. Noticeably so. That was nice.

So, why am I returning it and why did I go ahead, at midnight, 4-hours into wearing it, PRINTING the Amazon UPS label to return it.

First and foremost the backlight was beyond finicky and annoying. I turned OFF sleep mode and even with it turned OFF, I could NOT keep the damn light on for more than 10 seconds — even with the TIMEOUT set for: 30-seconds, 1 minute and ALWAYS ON! That drove me nuts.

It also took me 40 minutes, yes 40 minutes, to pair it with my 10″ ASUS Tablet running Android 7. I had to uninstall and REINSTALL Garmin Connect before I eventually succeeded. That my old Vivoactive HR was in the house appears to have been an issue. Garmin Connect and the ASUS wanted, so badly, to connect with THAT rather than the FR235. So, I was not happy.

Then, I discovered, to my intense chagrin (and embarrassment) that it does NOT measure STAIRS CLIMBED (because, I found out, it does not have a barometric altimeter)! Yikes. Climbing stairs is one of my favorite exercises and per my old Vivoactive HR I average 30 stairs climbs a day. I did NOT want a tracker that couldn’t track stairs.

Not being touchscreen was MORE of an issue than I had hoped!

Amazon, as ever, was cool. Plus, I hadn’t even had it for 12-hours and everything including the box are in pristine condition.

I Am Getting A Garmin Forerunner 235 For Now.

I was hoping to get a Vivoactive 3, in Slate, within 2 weeks. Well Garmin seems to have issues with the Slate version. Amazon, as of yesterday, no longer lists it! I had a pre-order at Amazon, BUT I cancelled it.

I thought about getting a Huawei or Samsung BUT decided that that would be shortsighted. I have too much ‘invested’ in Garmin.

I started doing some serious research and STUMBLED upon the Forerunner 235.

When I got the Vivoactive HR in June 2017 I was brand new to activity trackers — and there is, IF you are serious (as I became) a v. steep learning curve.

It doesn’t have a Swim or Walk mode, BUT it is Winter now and I can do without. It also does not have a touch screen.

But, being round and black it has the look of a dress watch IF you use an appropriate watch face. That was one of the BIG things I did NOT like about the HR. It looked ugly. I like nice watches (as you would expect from one who wore a diamond-studded, limited-edition Rolex for nearly 30-years).

I will get a Vivoactive 3 down the road … unless something else comes along. I most likely will keep the FR235 for my runs and the other for the rest of the day. As Winter sets in my running watch will take a BEATING.

Stay tuned. I will keep you posted.V02

P.S., The FR235 has VO2 Max estimation. That should be interesting. At my age, and my level of UNFITNESS, that might be scary. Might tell me that I am indeed the walking dead.

Click to ENLARGE and marvel here. Check Amazon IF you don’t believe me.

Click to ENLARGE. The order I had placed a week ago. My order was still pending. I cancelled it.

I went look ‘today’, i.e., Saturday, November 4, 2017, and discovered to my chagrin that Amazon has taken down its listing for the SLATE version — which is the model I wanted.

I Pre-Ordered A Garmin Vivoactive 3, In Slate, From Amazon …

I have nothing to lose. Amazon will NOT bill me until they ship.

IF it becomes available at Garmin or Best Buy, I will cancel the Amazon order (which I can do easily right up until they ship) and get it from …

I am NOT amused.

Garmin Vivoactive 3, In Slate, Slated To Be Available In 2 – 3 Weeks NOW Further Delayed!

Click to ENLARGE and stare at in disbelief! From Garmin @ buy.garmin.com

I check availability of the Garmin Vivoactive 3 — in SLATE — multiple times a day.

It was supposed to be available last Friday, October 20, 2017. But, only the stainless steel is currently available.

This morning they updated that to 3 – 5 weeks. NOT good. That puts it at or BEYOND Black Friday and close to Christmas.

At Garmin. Use above link IF you want to check.

So, today is Friday, October 20, 2017 — the day that a Garmin rep. told me that the Vivoactive 3 will be available. Appears not to be the case.

However, at last, the Garmin Vivoactive 3 in stainless steel is now readily available — from Garmin, Amazon & Best Buy, rather than just from Best Buy.

A good video.
Worth watching IF you are considering a Garmin Vivoactive 3.

The stainless-steel nor the white appeals. As some of you know, I, having worn a diamond-studded Rolex for 30-years, am fond of nice looking watches. Wearing the Vivoactive HR has been rather ‘different’ at times.

That was ANOTHER motivating factor to consider upgrading to the Vivoactive 3. With a leather or metal mesh strap it could look halfway dressy WHEN I am dressed up.

So, I want the slate model.

Got it from an insider at Garmin itself today. Shipments of the slate model are slated for October 20, 2017. I had heard that on the rumor mill too.

The white model is already available at Best Buy — BUT not at Amazon.

I might have to buy the slate model directly from Garmin.

What I am going to do with the Vivoactive HR is SOLVED. Devanee is going to take it!