I Have $24 Leather Straps On Both My Garmin Fenix 6s And They Look Great. 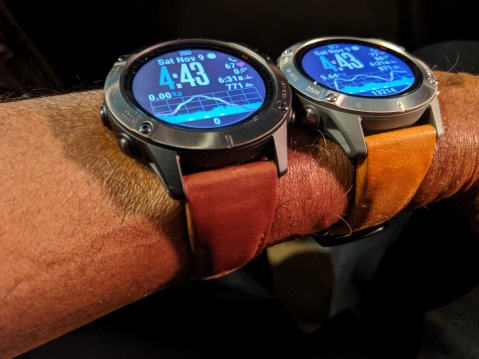 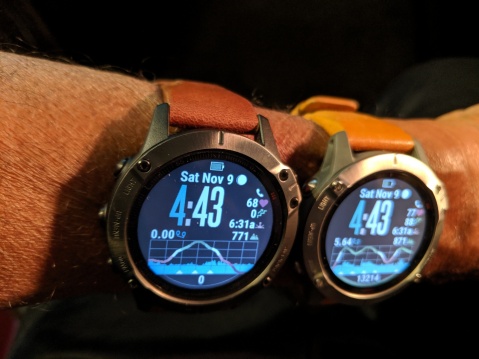 I like leather straps on my Garmins. It really started when I got my Garmin MARQ Explorer with its gorgeous (initially) $250 strap. No question. That is the nicest leather strap I have seen for a Garmin. But, I did not want to spoil that strap wearing in 24×7, especially with a lot of sweat or swimming (though Garmin claims that this will improve it ‘patenia’). So, I experimented with some other cheaper leather straps — including Garmin’s much cheaper, standard leather strap.

They were ‘OK’ but felt ‘plasticy’, didn’t have any stitching and tended to show scratches. So, I continued looking on Amazon and eBay. A couple of months ago I came across these $23.99 TRUMiRR straps. I got the darker one. It looked great and it did not quickly show wear-and-tear like the previous one. So, I got the light one too. I now have them on my two Fenix 6s. I think they look great and they work amazingly well. I stopped wearing my Garmins when I shower so as to stop getting the straps wet. It will become interesting next Summer when I start swimming. Will I start wearing one of my many silicone straps. I have never had a nylon strap and really should try one.

But, I wanted to share these TRUMiRR straps with you. I know you will be happy with them. All the best. PAX.

My Two Garmin Fenix 6 Sapphires Side-By-Side — The New Titanium On Left, The Other The Older Black. 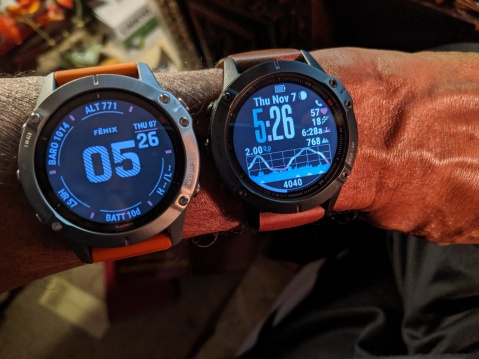 The Garmin MARQ Explorer I returned to get the Titanium Fenix 6.

So, I now have two Garmin Fenix 6 Pro Sapphires — latest in Titanium and the other in Black DLC. Yes, I like the Fenix 6. SMILE.

I like the Fenix 6 so much that I returned a Garmin MARQ Explorer to get the Titanium one!

Here is the ironney (and possible even sadness). The TWO Fenix 6s together, even with one being Titanium, costs less than the MARQ Explorer. That is sobering. But, having worn two I liked the Fenix 6 better. I am not new to Fenix. I have owned a Fenix 5 and a Fenix 5 Plus.

The Fenix 6 Titanium is JUST the bezel and maybe the back. The body is plastic. That is disappointing. The MARQ Explorer was all Titanium and, as the image above shows, had more presence. But, that is ‘OK’, I wasted too many hours getting the MARQ to go back to my watch face and do what it was supposed to do.

With the new maps released earlier this week there was a lot of software that had to be downloaded to my Fenix 6. Garmin Express had some issues. I had to do it twice — on two separate PCs, but in the end I got it all loaded and squared away. Good job I had a bit of experience with Garmin. SMILE.

Talking of which I do maintain an Excel Spreadsheet of all the smartwatches that pass through my hands given that I go through a fair number a year. This is today’s cut.

Yes, I got the Fenix 6 Sapphire — as I have my last 6 Garmins — from ‘Heart Rate Monitors USA‘ (HRM USA). I do not deal with anyone else.

Garmin Fenix 6 Has An AMOLED-Like Deep Black Display Background — Makes All The Difference. 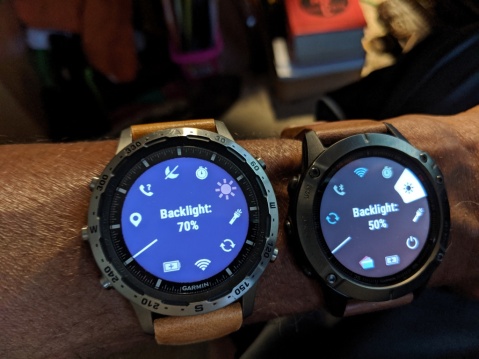 So, from the very first time I powered up my new Fenix 6 Sapphire, i.e., Tuesday, September 24, 2019, I knew there was something different about the display. I was aware that it was fractionally bigger than that of my Garmin MARQ Explorer (i.e., 1.3″ vs 1.2″) and had a marginally higher resolution (i.e., 260×260 vs 240×240). But, you could tell that there was something different and APPEALING about the Fenix 6 Display.

When I came around to doing the settings I noticed a big difference. In my old age I like a bright display. So, over the last 2-years or so I had the brightness on my Fenix 5, Fenix 5+ and MARQ Expedition all set at 70%. I was kind of used to 70% being my default setting — and, yes, I needed to charge my watches every couple of days (and having continuous PULSE Ox on the MARQ didn’t help). With the Fenix 6 when I got to 50% I was happy! Big difference. You can see that on the top picture: 70% vs. 50%.

Then, yesterday, I installed ActiFace on the Fenix 6 and was studying them side-by-side. See middle picture above.

That is when I noticed it and you can see it in the two top pictures. The display background on the Fenix 6 is deep black — like you would get on an AMOLED-display. That is what makes all the difference. It makes everything else POP. Notice that the fonts are also smoother. A better overall display. You can’t deny that.

Then the last picture is the final proof. The Fenix 6, with brightness at 50%, is brighter than the MARQ at 70%.

To be honest, I would no longer buy a MARQ Expedition! Get the titanium body Fenix 6 Sapphire and a $22 leather strap from Amazon and you can save yourself $500!

Garmin Gets A Huge Plug From The U.S. Acting DNI During The ‘Whistleblower Complaint’ House Hearing.

So, if you can find that.

Acting U.S. Director of National Intelligence (DNI), Joseph Maguire, a Navy Seal for 34-years, relies on Garmin to get him to work!

Wow. What BIGGER plus could you want.

Cracked me up. I was doing my 4+ mile walk, with my brand new Garmin Fenix 6 Sapphire, listening to the hearings (I being an unashamed news junkie) on a pocket transistor. [Yes, at 66, I am old fashioned. Just like I was doing 50-years ago, as a boy, I carry a pocket transistor radio IF I want to listen to the radio. Rarely music. Usually NPR or some other talk show. Yes, I carry, not always, my Google Pixel 2 phone as well, but I do not have a radio APP on it. SMILE.]

Joseph Maguire, who has only been Acting DNI, for 6-weeks was outlining the timeline as to how and when he heard about this whistleblower complaint.

He was trying to explain that it was still his 2nd day in this new job and that “he was still using Garmin to get to work“.

Full disclosure: I am a long-term Garmin Shareholder (and maybe because of that) own a Garmin MARQ Expedition & A Fenix 6 Sapphire. 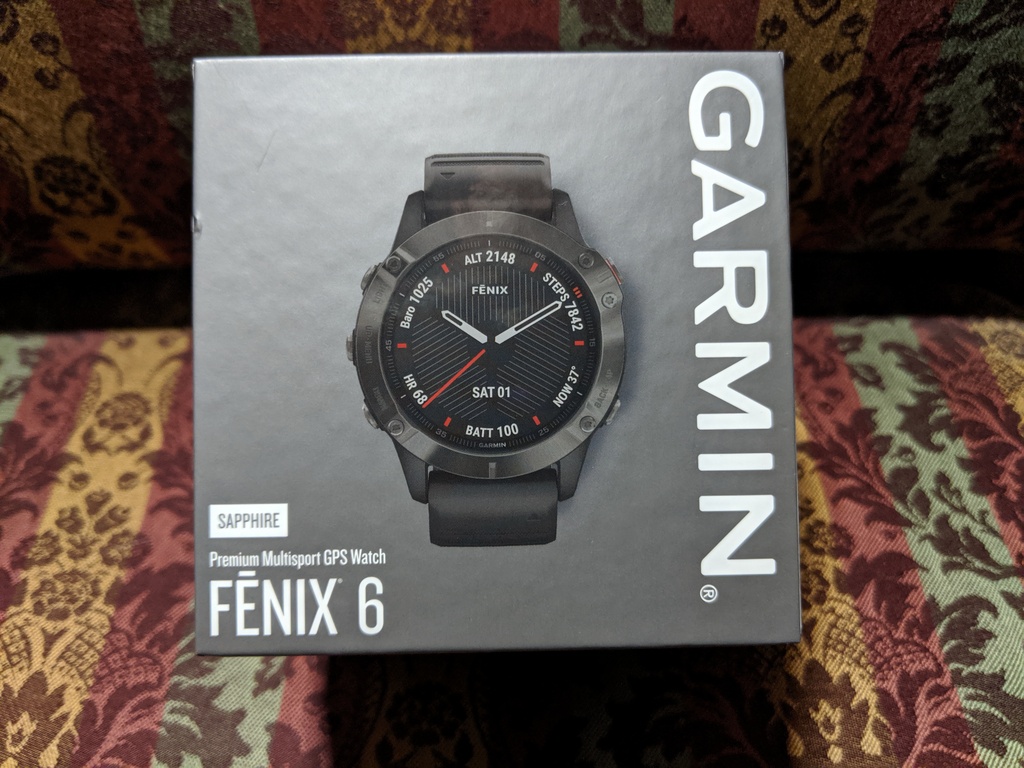 I hope you can tell which is which. The Fenix 6 still has the ‘stimulated topo map‘ sticker that is affixed to the face. The MARQ Explorer has the titanium body.

I took these as I was unboxing the Fenix 6. I hadn’t charged it as yet. I haven’t charged it as YET! Sorry. Crazy busy day. Didn’t want to rush it. I do have a MARQ on my wrist. I want to ENJOY the whole process. Yes, of course, I will keep you posted.

Yes, I got the Fenix 6 Sapphire — as I have my last 6 Garmins — from ‘Heart Rate Monitors USA‘ (HRM USA). I do not deal with anyone else.