More Pictures Of Plane That ‘Crashed’ At Alton’s Famous “Airport On Ice” On February 10, 2019.

You can see the BENT prop on the left and the scraped paint on the right prop. 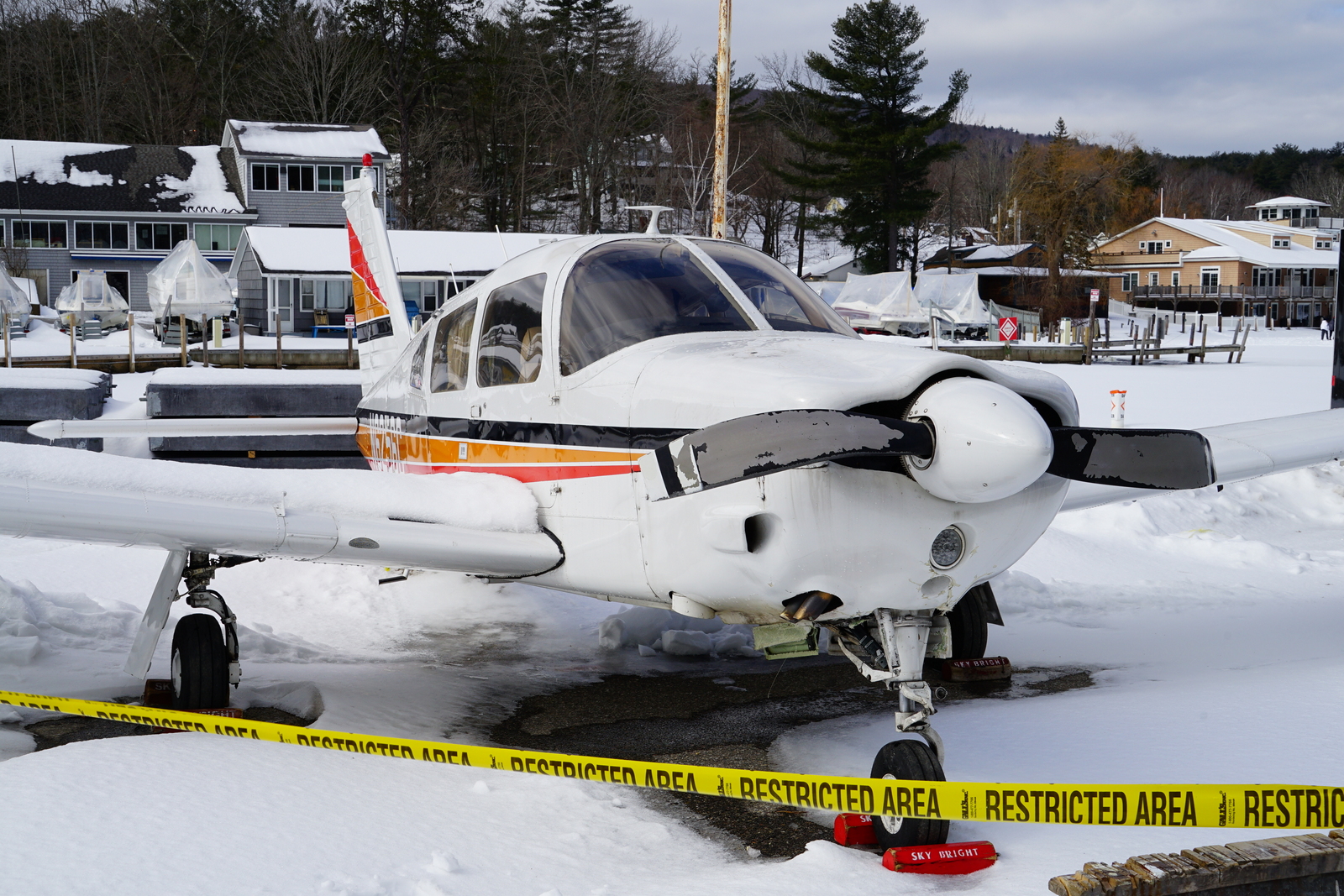 They have moved the plane from the ice to an adjoining car park. It was blocking the main taxiway — so that makes a lot of sense.

I guess they are still waiting for the FAA to finish its investigation — and hopefully to get a new prop. That seems to be the only thing that got damaged. I have to suspect that a prop is not cheap. Plus most likely their insurance will go sky high.

For more pictures of the: ‘airport on ice — in action‘. 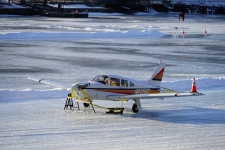 You can see the BENT prop on the far-side. The plane is held up on a trestle.

We drove by at 3:45pm hoping to take some pictures of planes to add to those that I took last Sunday.

This was the ONLY plane there was and I knew that it had had a mishap. It was all on its lonesome in the middle of the taxiway and you could clearly see that it was propped up. From past accidents, I assume they have to wait for a FAA (NTSB) inspector to come and check the accident and give the ‘all clear’.

When I got home I saw the ‘Union Leader’ post (above).

We have had more spectacular crashes in the past. See below.

The de Havilland Comet, in particular the Comet 4, was my first love when it came to planes — and it has been a lifelong infatuation starting from when I was about 2. The Comet 4, flown by BOAC, was the first jet plane I ever saw — in Colombo, Ceylon. I never got to fly on it. My adopted parents did. I saw them take-off in one. It used to have this amazingly steep climb — much steeper than today’s jet.

This March 3 crash was the 1st in 26 — which eventually led to it being decommissioned.

Malaysian Airlines MH370: 21 Month Anniversary. Others May Have Forgotten.

This is the LATEST.

Malaysian Airlines MH370: 20 Month Anniversary. I Will Not Forget.

Maldives keep on cropping up.

This is the LATEST.

This is the LATEST? Latest? After 19 months?

OK, so now it is confirmed that the ‘flapron’, at least based on serial numbers, is from MH370 — though obviously, given the scale of this cover-up, the serial numbers could have been restamped.

But, CONTRARY to what I have already heard the likes of CNN saying, this does NOT, in any shape or form, confirm that MH370 crashed into the Indian Ocean.

The ‘flaperon’ could have been ripped off a perfectly intact MH370 and thrown into the ocean to act as the red herring it is now proving to be.

I am sure you don’t know about this — a VERY FAMOUS Red Herring from WW II to totally outfox the Germans. They even used a body of a person who died from pneumonia so that there would be water in the lungs to make it appear that he drowned. So, this deception would be child’s play.

Malaysian Airlines MH370: Why The Maldives Cover Up?

Yet again the Maldives come up as possibly where MH370 came ‘to rest’ — 18 MONTHS after I, very publicly, pointed out, on March 15, 2014, that ‘they’ should look around the Maldive Islands.

There were Islanders claiming, within the day of MH370 going missing, that they saw a large white plane flying low over the Islands. But, ‘they’ REFUSED to look around the Maldives. Why?

This has continued to bother me. Something BIG happened. And there has been one heck of a COVER UP. At last the relatives of the MH370 passengers are coming to realize that they have been duped, right royally duped, for 18 months.

Here are some key questions YOU need to think about.

1/ Is it in anyway conceivable that the Unites States has NO satellite imagery of the Indian Ocean? That defies credulity. MH370 was in the air for at least 6 hours. The U.S. has some satellite imagery of it. Of that I have NO doubt. What has always puzzled me is WHY people have not been agitating about this. There has to be decent people around who know what kind of imaging capabilities the U.S. possesses and I am sure that the capabilities are extensive. So this begs the question why has the U.S. kept mum for so long and why haven’t world leaders called upon the U.S. to divulge the G-2 that they must possess?

2/ Did a U.S. fighter accidentally shoot down MH370? Happens?

3/ As I have talked about before was MH370 sent on a ‘fishing trip’, as was the ill-fated Korean KAL-007, and things didn’t turn out too well?

4/ I have a fairly good ideas as to why Australia did the cover-up act for as long as they did. Australia has always been a good ally to Western powers. Just think WW I and II. They had to have been asked to provide a smoke screen and they ably did that for months — though they knew that it was hurting their credibility.

The Maldives, in my opinion, holds the key to solving the MH370 mystery. But what I cannot, for the world of me, understand is why people just won’t start looking around the Islands. What are they covering up?

Malaysian Airlines MH370: The Reunion Debris, The Flaperon, Does NOT Prove It Crashed Into The Indian Ocean!

Just SOME of the Related post:
>> Debris on Reunion …

The flapron could have been THROWN into the Indian Ocean
to make it look that MH370 crashed.

One small piece of debris does NOT prove that MH370 crashed into the ocean.

That is a possibility BUT that piece of debris is NOT conclusive proof.

MH370 could have still landed, intact — maybe even in the Maldives. The flapron could have been hacked off and thrown into the ocean. Barnacles mean nothing. It could have got thrown off a ship.

So just think. That is all I ask. THINK.

Flapron is not proof, ALONE, of MH370 crashing into the ocean.

We need to see the debris field.

This is called a NON SEQUITUR.

Maldives, which I was the FIRST to suggest,
16 months ago, still makes MORE sense than Australia.