I Switched To A Google ‘Pixel 4’ From A ‘Pixel 2’, Continuing To Use ‘Google Fi’ As My Carrier — And It Was Painless. 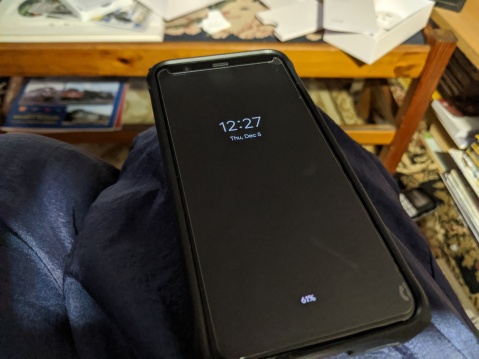 First 2 Pictures With The Google Pixel 4.

The offer from the ‘Google Store’ I couldn’t turn down.

First Pictures of the Day with Google Pixel 4.

This, believe it or NOT, is but the 2nd (as in ‘second’) smartphone I have ever had! The Google Pixel 2, that I treated myself to at Christmas 2017, was my first. So, this was my first time transitioning from one smartphone to another. The only part that I was leery about was how things would work out with ‘Google Fi‘. Of late, I have had some issues with ‘Google Fi’ transactions and support and as such had fears that transferring my number from the Pixel 2 to the Pixel 4 might be problematic and that ‘Fi’ would force me to get a new number. Not so. That went very smoothly. I was glad.

Superficially, other than the unmistakable camera ‘cluster’, the Pixel 4 looks very much like the Pixel 2. But, that is deceiving. Quite different animals, both in terms of hardware and software — though I had Android 10 on my Pixel 2. The latest Android on the Pixel 4 doesn’t have the ever-so familiar ‘<< (back) & ο (home)‘ buttons on the bottom. You swipe-up for home. That works and I got used to that easy enough. I, maybe, even like that. ‘Back’ is more problematic. You have to SWIPE ACROSS the screen and, in my experience, it is hit-or-miss. I need to look into that further.

The camera works. That is ALL I can say for now. Pictures are ‘OK’. Haven’t seen anything spectacular as yet. But, at the same time, I have also only taken less than 30 pictures.

Pairing with my Garmin Fenix 6 Pro Titanium has been a HUGE problem. Very disconcerting. Yikes. Hope I can sort that out.

Face detection is cute, but also hit-and-miss. I re-registered my face. Might have to do it again.

So, therein lies the first 1/2 day so to speak.