Running Up Philadelphia’s “Rocky Steps” Is No Big Deal. A Walk In The Park 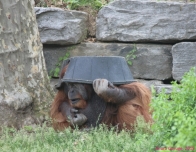 Click to see fleeting 27-second YouTube video of I running up the Rocky Steps, to start off with Teischan. Devanee opted to shoot the video than race me up the steps.

This, like seeing the Orangutan with a plastic bin over his head at the Philadelphia Zoo, took place on Sunday, May 17, 2015. Teischan, Devanee and I had arrived in Philadelphia late the night before so that we could pick-up our burgundy red Jaguar XJ8 on Monday. We were at the Museum on the way back from the Zoo. Racing the kids up stairs and steps, à la “Rocky Steps“, has been a fun and contentious 20 year pastime. None of the 4 kids have yet been able to beat their old man (though Danielle’s ex-marine boyfriend did do so). Devanee, last year, nearly as tall as Dad, got close — within 1 step. I know that my days are numbered. I am getting older, the knees yet again are getting wobbly and Devanee and Teischan are getting bigger and fitter.

This was fun. It is NOT hard. Piece of cake. But as Devanee loved to point out after each such race: “It is not fair. You run, each day, up a ‘frikking’ mountain, with 6 pounds of weights on your wrist”. I always point out that nobody is stopping her from running up the same hill wearing 6 pounds of wrist weights.

Pope Francis will be conducting his Mass, in September, from the top of these very steps. I doubt whether he will climb them. But he is older than me and is half a lung worse off.

Fun place. I liked Philly. Been there ‘tons’ of times from 1985 to 2000 — BUT always for business or to do a seminar. Never did the tourist stuff. Kind of strange. The person that I have been to Philly most was Don ‘Gomer’ Pyle — and now he is dead.