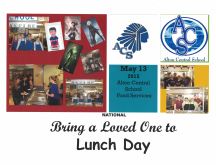 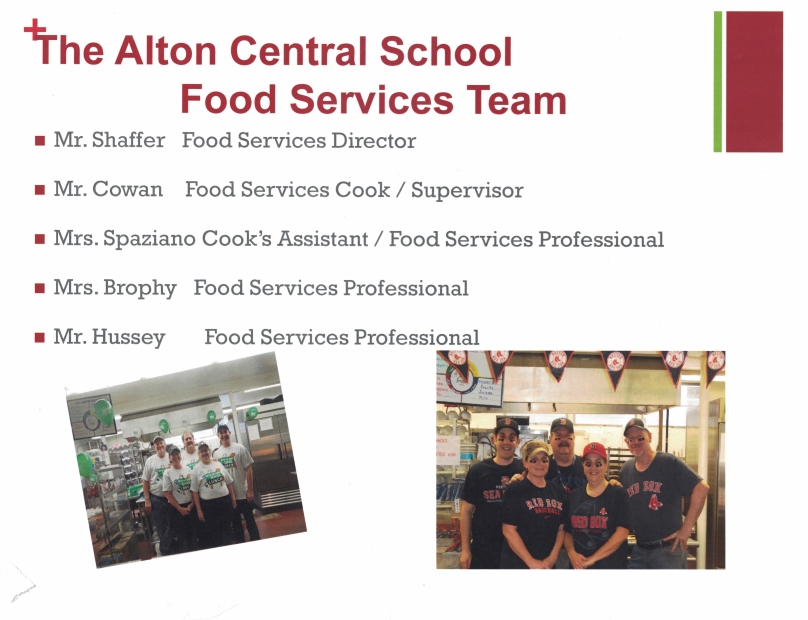 Mr. Shaffer has been Alton Central School’s much beloved, hugely popular, well respected and ultra competent Director of Food Services. There are many outstanding people, programs and features at ACS and ‘Food Services’, THANKS to Mr. Shaffer and his protégé, Mr. Cowan, the Supervisor/Cook, is one of them.

We have known Mr. Shaffer ever since Devanee started attending ACS in 2007 and Deanna has dealt with him, keeping Devanee’s account topped up, with great success, over those years. I talk to him whenever I see him and I am very fond of him. He does a great job — with what I assume are limited resources.

He will be sorely missed, though I am sure Mr. Cowan will step into the breach. Mr. Shaffer is one of those lucky people that will be remembered, with fondness, for years to come. We wish him all of the very best. He sure has earned it.

Yesterday, Wednesday, May 13, 2015, was HIS last “Bring a Loved One To Lunch Day”. As ever it was very good BUT it was also poignant that folks like I knew that this was to be Mr. Shaffer’s last. It was good that, at the end, Mr. Cowan announced it and, as was to be expected, there was a huge round of heartfelt applause.

I don’t think I have missed a “Bring a Loved One To Lunch” in years. I always enjoy them. Also a chance to meet other parents and grandparents.

I, however, in addition to Mr. Shaffer’s upcoming retirement, felt kind of sad yesterday. About half the kids, if not more, did NOT have any loved ones present. I think that affected some of the kids — as is understandable. We are lucky that we are both ‘at home’ — and Deanna even volunteered for a few hours for the lunch. I was seated next to William. He was not somebody I knew. Very nice boy. He did not stop talking. That was fine with me. Told me about an upcoming trip to Fenway, his mother’s birthday which had fallen on Mother’s Day, his unrequited love for his girlfriend etc. etc. You could tell he was compensating for not having someone there with me. So I had to do, and I felt honored. I like kids and he was all boy — and I miss not having a young son. Matthew, at that age, was 15 years ago. But, there was a problem. He was not eating. He had a hot dog and french fries and we helped him open his ketchup, which he smothered over everything. But he wouldn’t eat. I learnt that normally he was a fast and thorough eater. I coaxed him to eat some of his french fries and he nibbled at his hot dog. But he didn’t eat it all. You could tell, that deep down, he was upset. Some other kids, who also didn’t have any ‘loved ones’ present, congregated at their own, kids only table. It was kind of sad. It even got me thinking whether these lunches, despite their value, popularity and success, are the right thing to do. Obviously it hurts some kids — like William. Something to think about.

Philadelphia Amtrak 188 Train — Should “Business Class” Car Have Been Right Behind Locomotive?

Click to ENLARGE and view here. From the “New York Times”. Use link below to access original — which I have also quoted in earlier posts.

Sad and ironic that the rail car that suffered the most damage — unimaginable in its devastation — was the ‘Business Class‘ car, which happened to be the ‘first car‘, right behind the locomotive. I assume that most of the fatalities and serious injuries that resulted happened to passengers in this car. Seems sad. They pay the most and end up suffering the most.

But, this is the same argument about First and Business class on airplanes. They are always at the front. I know. I have, over my 62 years, flown 2.5 million miles (with a Lifetime Gold Card from AA to commemorate my million miles just with them) and at least 60% of this was in the front of planes. One of my earlier wives used to always quip, “Anu has no idea that planes have seats with seat numbers that are greater than ‘6’”.

And then there is this very famous and profound adage that goes: “Have you ever heard of a plane flying into a mountain backwards?”

On planes ONE of the reasons that First/Business class is at the front has to do with engine noise — plane engines either being in the middle or back of the plane.

Not sure why you would put the Business Class car right behind the engine? Not sure if that is always the case either. It is possible that the logic is that the locomotive, in front, provides the MOST ‘cushioning’ — though in a front impact it also means that that carriage is closer to the impact.

I do not, and never have, travelled Amtrak that much. The last time was about 4 years ago. The trip to Philadelphia, that got disrupted by this Brandon Bostian recklessness, was unusual. I typically fly or drive. I will have to do some research as to what would be the optimum positioning for a Business Class car KNOWING that each and every train accident has its own dynamics. Just the stuff that rattle around my brain.

I have a sinking feeling that we have some type of mental issue here — with Brandon Bostian.

There are more people with mental issues in the U.S. than most people even have a clue. I saw these pictures of Brandon Bostian, this morning, while having my coffee in bed, in the U.K. “Daily Mail“, the ONLY newspaper I read (and have been doing so since the 1970s).

Nice enough looking guy, even dashingly handsome in his later pictures, BUT look at some of the earlier ones.

Simple question. Does Amtrak ever check the mental situation of their engineers?

The statement by Brandon Bostian’s lawyer (above) is VERY telling. No “health issues to speak of”. Good lawyer-speak. Says nothing about MENTAL health.

Says he was not on medication. So on face value it would mean he wasn’t taking any ‘psychiatric’ drugs. BUT again lawyer-speak. Did he STOP taking such drugs? Did that result in suicidal thoughts? Irrational behavior? Did anybody say anything to Amtrak about him acting strange?

Wakeup call for Amtrak. You have to be on top of the mental profile of all your employees.

We used to have the saying “Going Postal”.

Will be have to add “Going Amtrak”?

Was Brandon Bostian, Philadelphia Amtrak 188 Engineer Doing A Germanwings? Was He On Antidepressants?

This tragedy, Amtrak train 188 derailment with 7 fatalities, hit close to home. I was booked on an Amtrak train to Philadelphia on Thursday, May 14, 2015. Suffice to say I can’t get to Philadelphia by train at the moment. But that is small potatoes and I am not going to bitch about that (though I am put out by how poorly Amtrak is handling the aftermath). The accident, however, totally rattled Deanna. It was too ‘close’ for her comfort.

I had, hours ahead of the reports, suspected speed. But even I had not thought the train would have been going at TWICE the speed limit.

They say that they have ruled out terrorism but I think they might have to revisit that.

The engineer, Brandon Bostian, was up to SOMETHING. He had to accelerate that train from a dead stop, at Philadelphia’s station, to 106 mph in less than 10 minutes. That is going some.

Was he trying to a Germanwings?

Is he another Andreas Lubitz? Trial run that went wrong?

Yes, I know he hit the emergency brakes 2 seconds ahead of the crash. That doesn’t rule out attempted suicide. He just might have lost his nerve at the last minute.

Was he on antidepressants? Will they be even allowed to ask?

I am AMAZED that he was allowed to have a cell phone on him. There is a warrant out for it (and a claim that he has already handed it in). I thought engineers were no longer permitted electronics in the cab?

If he was on the phone ‘they’ should, before any other punishment, shove that phone down his throat. 7 people killed.

I have not been following what has happened to other ‘at fault’ engineers. This guy deserves all that awaits him.