Oliver Mtukudzi & The Black Spirits At Dartmouth HOP On Friday, Jan. 30, 2015: You Felt Privileged To Be There! 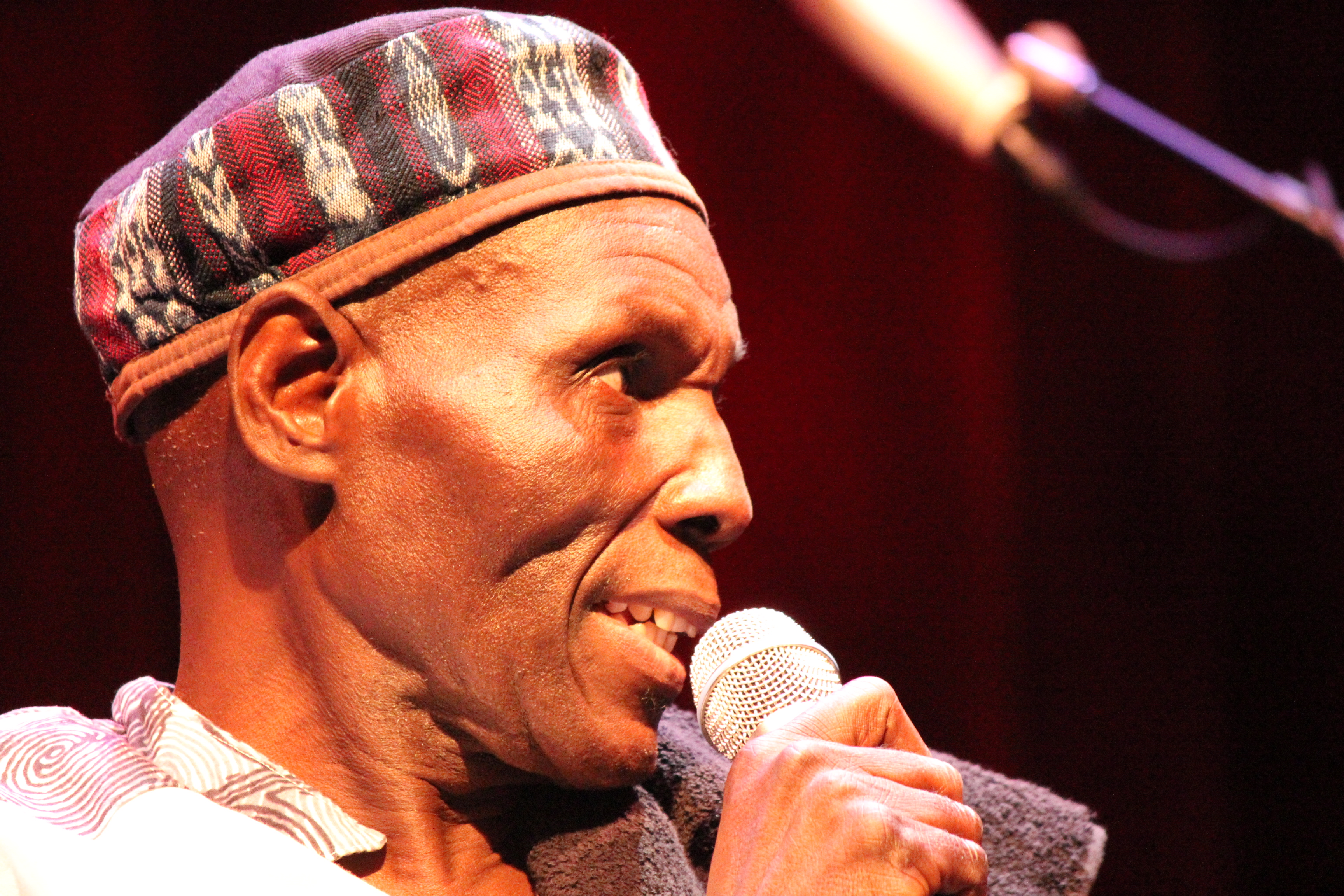 While the non-stop music, was exquisite, there was this palpable air that you were privileged to be in the presence of GREATNESS that transcended the incessant twangy rhythm. It was a very rewarding and uplifting experience. Oliver Mtukudzi is quite the all rounder entertainer. Not only can he sing, delectably, he is quite the mover (even at 62), and a very good story teller. I had seen Roger McGuinn, of ‘The Byrds’, c. 1989 — and Oliver, in his style and commanding presence, reminded me of Roger — and I am not sure who will be happier with that comparison. That Oliver talked about ‘getting no time at all’ to write ‘Neria’, the title song of the movie of that name he appeared in, and that Roger will invariably tell the story of how he was sent a scrap of paper with the words “The river flows …”, handwritten by Bob Dylan, and he wrote the title song for “Easy Rider” based on that (as Dylan had hoped) kind of added to the similarity between the two. Both are towering giants in music.

It was quite the concert. They played, they sang, they danced, without a break of any sort, for a full two hours. It was mesmerizing. Twice during the concert a special protégé of Oliver’s, from Uganda, who played this most beautiful instrument, both visually and tonally, that had some resemblance to s sitar, came on stage. That instrument, with a very pleasing, very distinct picking sound, just added to the overall quality of the music.

I have never had any music training so I do not have the right vocabulary nor the skills to accurately describe what indeed was music to the ear. Very rhythmic. Probably primeval in some way that we all seemed to enjoy it, and there was much dancing and swaying in the aisles, though 80% of the lyrics were not in English. All I can say is that the strings on their 3 guitars produced a heavy, lingering sound, though the notes themselves were light and delicate. But they somehow kept them from drifting upwards and away. The sound was contained. It was as if the bass created a cube around the stage. The music reverberated within that space. There was always rhythm going. Even when Oliver was talking. It was mesmerizing. Folks appeared to love it. I heard an older gentleman saying “Wasn’t that special” as we were walking out. And, indeed, it was special.

Given that I have had (prior to the one we bought at the concert) 3 or 4 Oliver CDs, including “The Oliver Mtukudzi Collection” (shown way up at the top), for many a year — the first going back at least to 2004, I was familiar with at least 40% of the songs he performed. That was nice. Nothing like a live rendition, by the artist itself, of a song you know. We really liked it. So glad we went — not that we would have missed it, and we braved the forecasted late night snow (which never materialized) because I wasn’t going to let that stop us from seeing THE MAN.

We, of course, stayed for the post-performance discussion. Very interesting, very serious man. Said that the main theme of his music is that of ‘self discipline’. I, of course, could identify with that. He was born September 22, 1952. He is exactly one year older than me. I, growing up in Britain, learnt the word ‘unilateral’ from UDI that was declared by Zimbabwe (née Rhodesia) — Unilateral Declaration of Independence. The country has seen more than its fair share of toil and turmoil. HIV/AIDS is a big issue. All of that shows on Oliver’s face; probably now Zimbabwe’s greatest ambassador.

It was an inspired move by the HOP to have them perform in N.H. I am so glad. Thank YOU, the HOP. You did it again. There were a lot of young, very enthusiastic and happy folks at the concert from Zimbabwe and South Africa. Made it all even more magical. Thank you. Thank you. Thank you.

A montage of all the Oliver pictures I took last night
during the post-performance discussion.

One response to “Oliver Mtukudzi & The Black Spirits At Dartmouth HOP On Friday, Jan. 30, 2015: You Felt Privileged To Be There!”