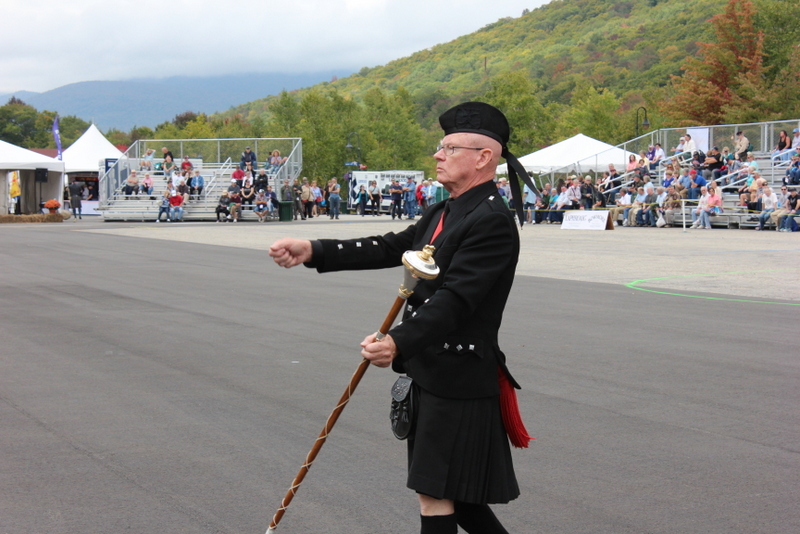 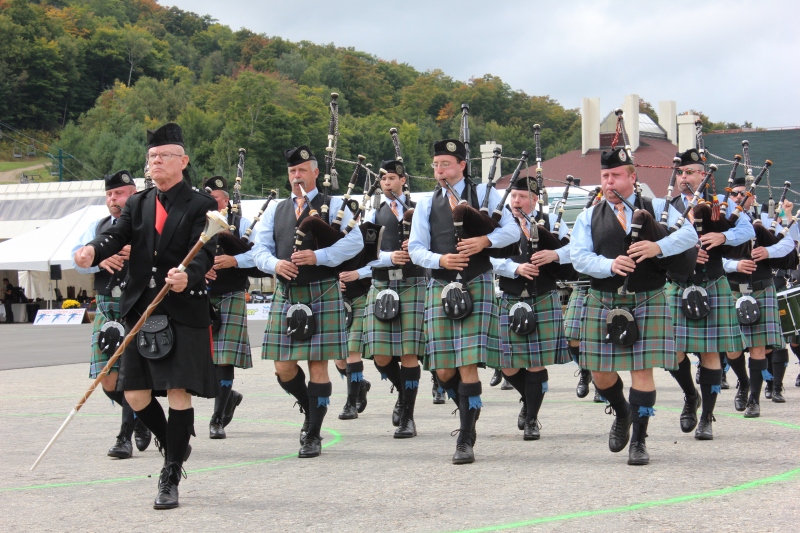 IF you rather see the same images as an automated photomontage,
set to music (though not the band’s), on YouTube click this image.

“The Brigadoons” — Incomparable & Evergreen at the 2014 “Highland Games” at Loon, New Hampshire. 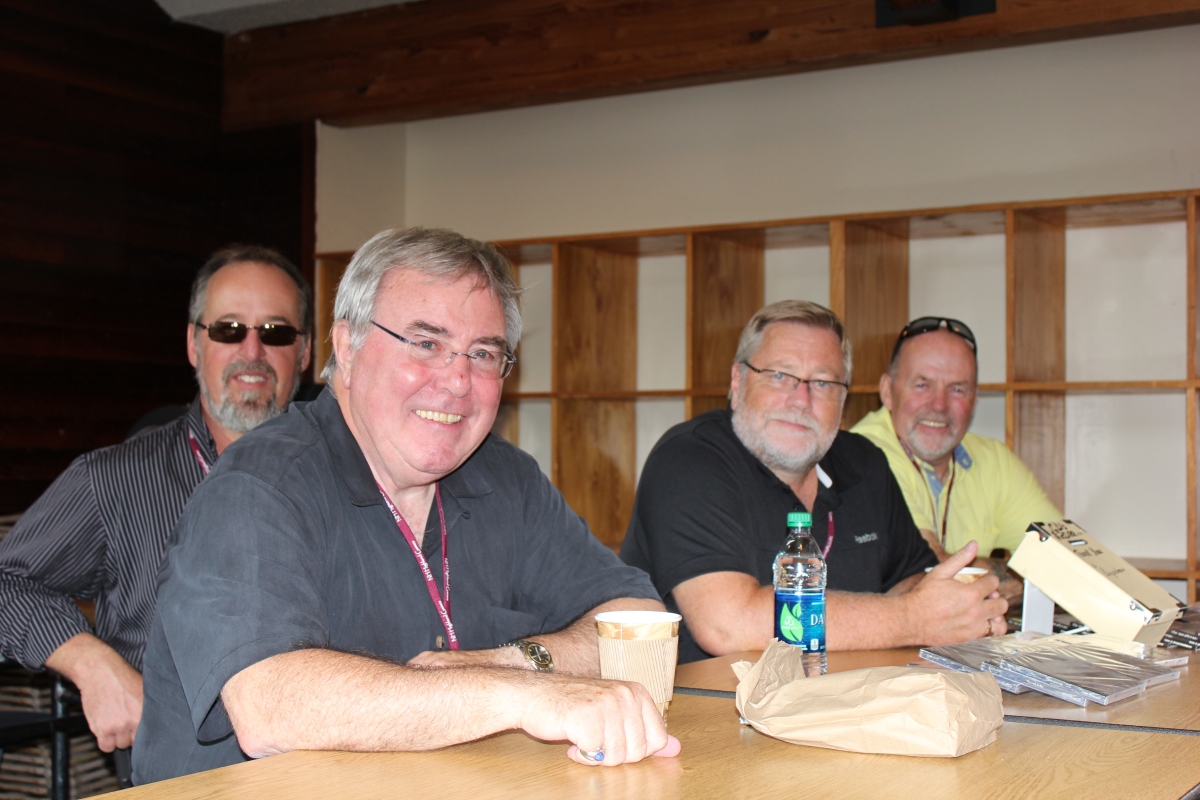 To me this will ALWAYS be the face, voice and SPIRIT of the “Highland Games”, Loon, N.H. 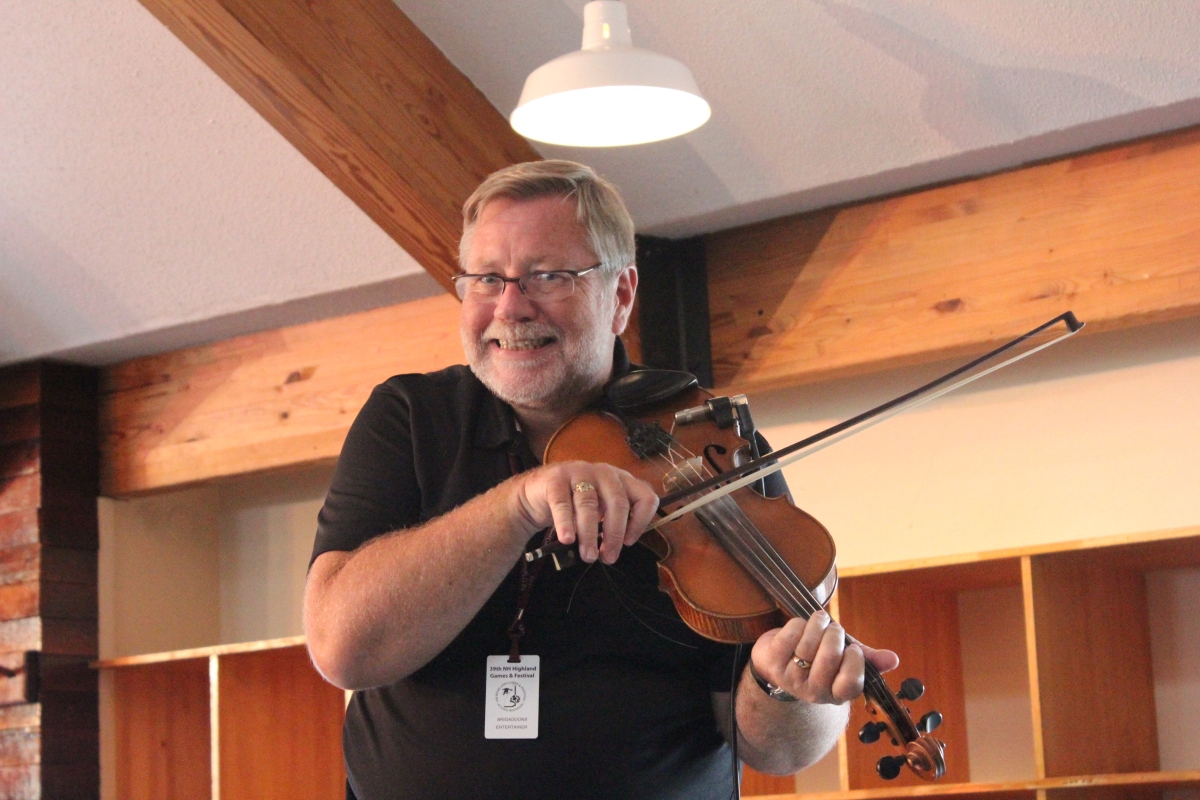 Yes, he saw me taking pictures from the front row. 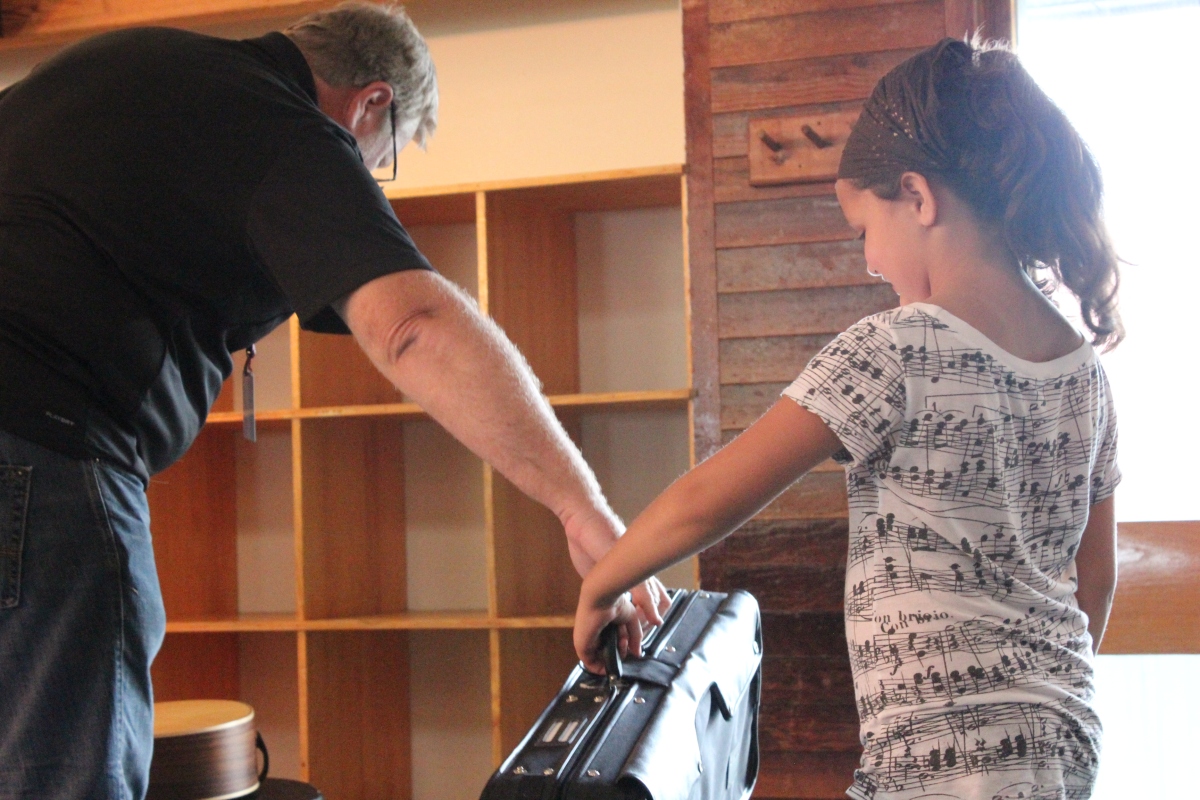 He asked Teischan for a hand. Not sure whether he knew who she was and that she has seen & heard them ever since she was born. She is eight and this was her 7th games — and we never miss the Brigadoons.

That I am an avid and rabid fan of Denis Carr and The Brigadoons is NO secret. I first saw them, at the then ‘Performance Tent’, opposite the gondola, at Loon, in 1998 — and it was love at first note. They struck a chord. To me THEY ARE the ‘Highland Games‘. Everybody knows that — the ONE performance that I have to see. No caveats. Once I have seen them I am happy.

Yesterday it all became very clear — though there really was no reason for any clarification. As soon as Denis started singing I felt a joy of sheer bliss coarse through my veins. It was like, I assume (because I have yet to try it though I keep on promising myself that I really must try it) having a good single malt pumped into me intravenously. I immediately felt refreshed and rejuvenated. I had finished the printed version of “Popes: 101 Facts & Trivia” the night before and was feeling the usual writer’s equivalent of postpartum depression. Listening to Denis I was at once reenergized ready to start on the next book! Thank you, Denis. That alone was well worth the $20 entrance. I will gladly pay $20 to see just ‘The Brigadoons’ any day of the week. They really are magic. Do you kind of get this feeling that I kind of like the Brigadoons.

It was a bit of a low-key affair on Sunday. I think Denis had been drinking too much tea! That is an insider joke and we will honor his privacy THOUGH it should be noted that YET AGAIN a member of the Brigadoons was absent due to pregnancy. I wonder what they put in their TEA! They didn’t have their kilts on. They appeared to have lost them the night before. It must have to do with the tea! It was still GOOD. Very good.

We just happened to be seated in the front row – Deanna having got the seats before the performance. But I knew we had to leave 10 minutes before the end! The ‘Glengarry Bhoys’ were starting at 1:45 pm at the Concert Tent and I didn’t want to miss their entrance after — what was it 13 years! I felt dreadful when we got up. I kind of did an embarrassed wave, ducking move. I think Denis made a remark. But I am also sure that they know that we are their GREATEST fans at the show.

That ‘they’ didn’t schedule the Brigadoons in the Concret Tent is inexcusable. They are still BIGGER and BETTER than most of the names that get to play in the Tent.

IF ‘they’ had any sense, which alas they don’t, they would have had ‘The Brigadoons’ at the Tent at 1:00 pm followed by the ‘Glengarry Bhoys’. Then maybe they might have even jammed together.

Well here is a photomontage of 27 pictures I took of ‘The Brigadoons’. Alas I can only use YouTube provided music. But enjoy. It is fun to see them in action. I do have two short videos of them, that Deanna took, which I will post on YouTube later.

Click to access photomontage of 27 pictures taken of ‘The Brigadoons’ at the 2014 Highland Games at Loon on Sunday, September 21. The music is NOT THEIRS. Sorry!

Poulos Insurance Is Buying, At A Minimum, The Cross Insurance Office In Alton, N.H.

++++ Search ‘insurance‘ for other related posts, albeit most of them about health insurance >>>>

A little bird just notified me that Poulos Insurance, who I have never heard of, is buying, at a minimum, the Cross Insurance office in Alton, N.H. where I get my auto and property insurance from.

Not sure whether this is good or bad news.

I was and still am VERY CROSS with Cross for abandoning the Alton office. I have had words with them directly about that.

Now it looks like that the office will remain open BUT not with Cross.

Well if Poulos proves to be clueless having the office but no competence isn’t going to help me.

NOT sure, and I cannot ascertain as yet, whether Poulos is buying ALL of Cross, all of Cross N.H. or just the Alton office. 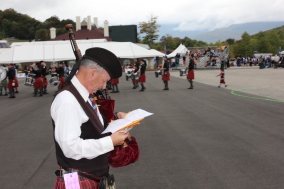 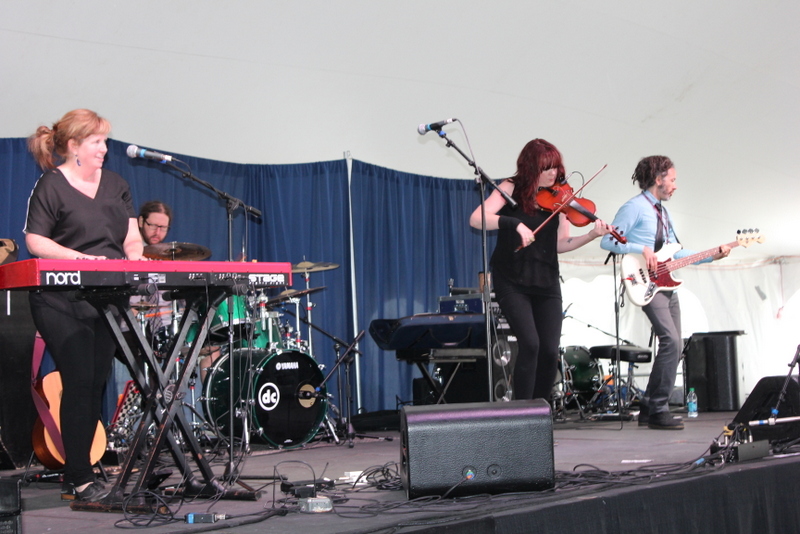 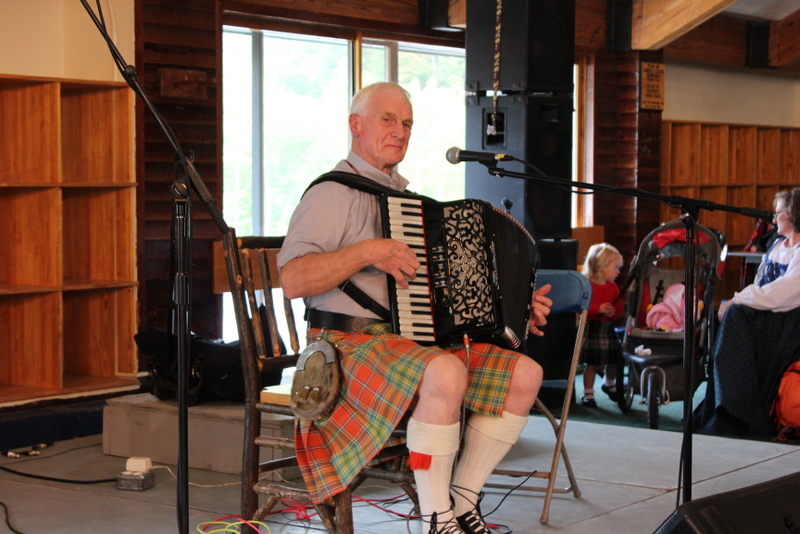 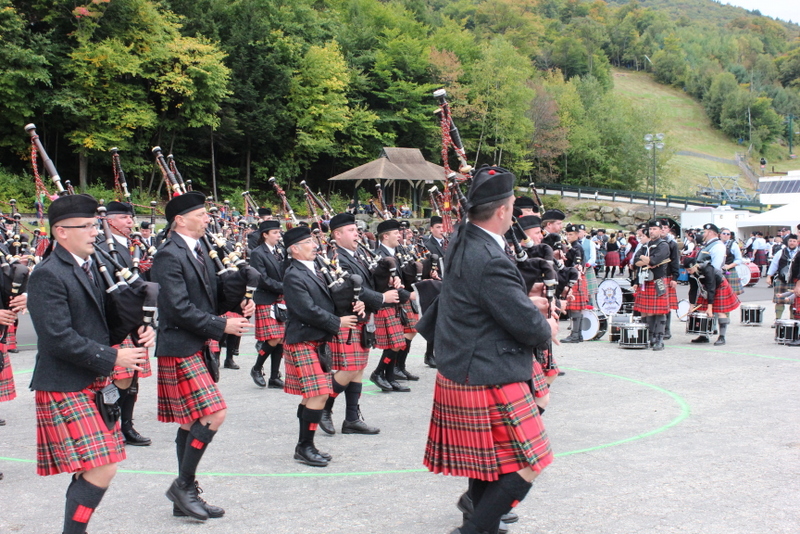 Not counting the pipers, pipe bands and pipe band drummer, the other performers, in the order in which they appear are: Searson, Charlie Zahm, John Carmichael, Brigadoons, Glengarry Bhoys & American Rogues.

A photomontage of the “Glengarry Bhoys” concert
on Sunday, September 21, 2014
at the ‘Highland Games‘, Loon, New Hampshire.

The music is a copyright free track from YouTube.
IT IS NOT THEM PLAYING! 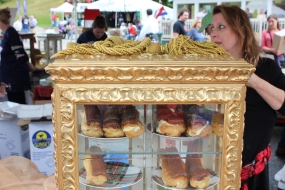 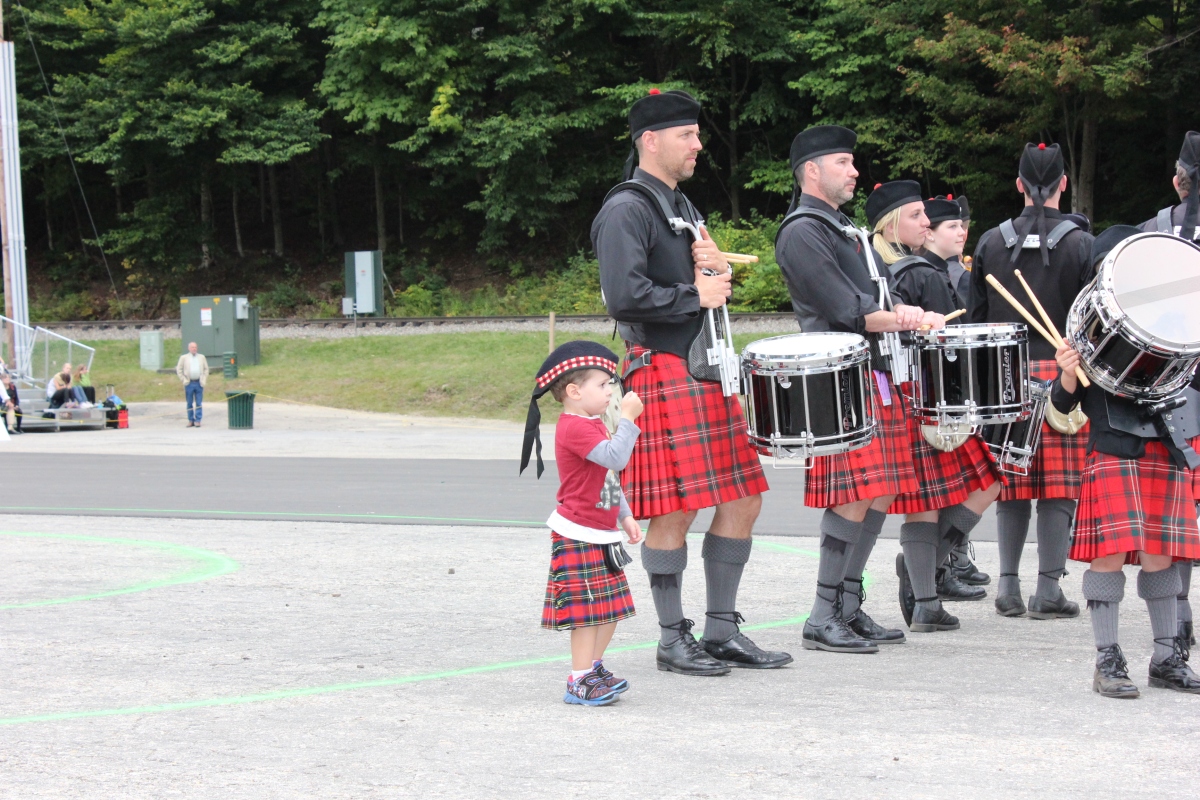 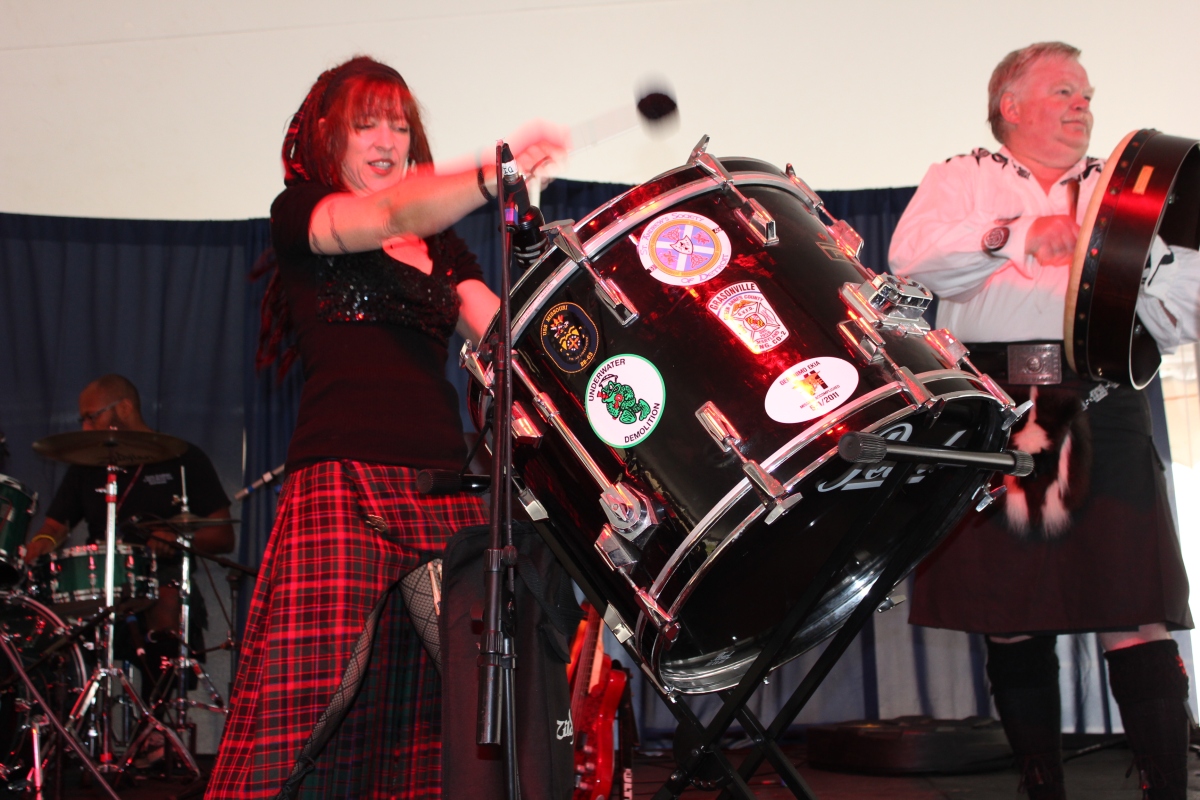 Yes, we went on Sunday, September 21 — now that I knew after Thursday’s referendum that we are still one and GREAT.

It was good. Very good. The weather on Sunday was pretty damn close to perfect for the Games. No rain. The sun came out in the afternoon and it was warm enough that I had to strip down just to a no-sleeves T-shirt.

Wasn’t too crowded. Very relaxed atmosphere. The “Glengarry Bhoys” and the “Brigadoons“, who didn’t alas play together, were still great. The “American Rogues” were interesting. They would be even better if they stop trying to be so patronizing and curry favor from all and sundry.

I took 360 pictures from my camera. I will post some of them over the next 48 hours. Here are some of my favorites.