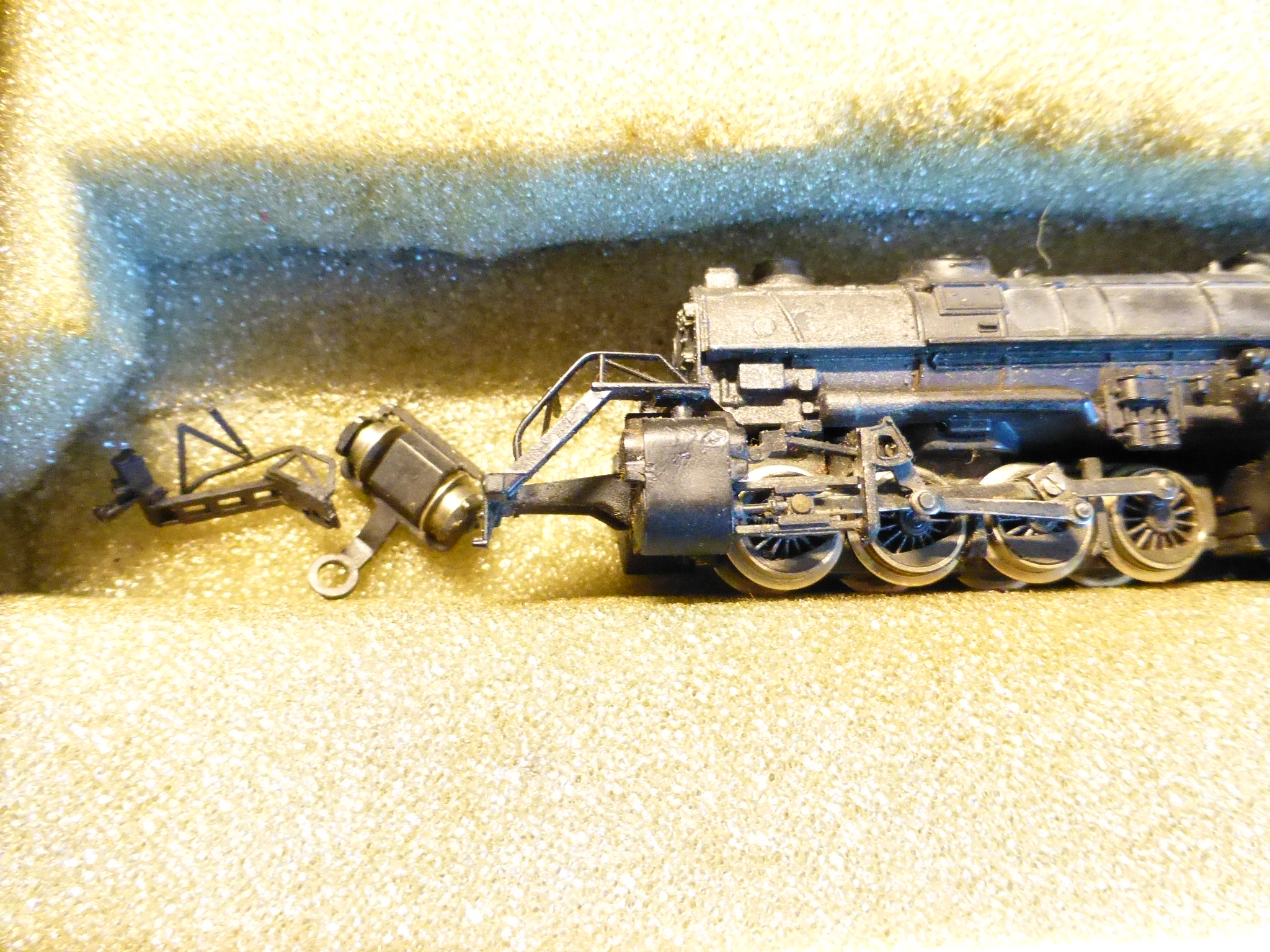 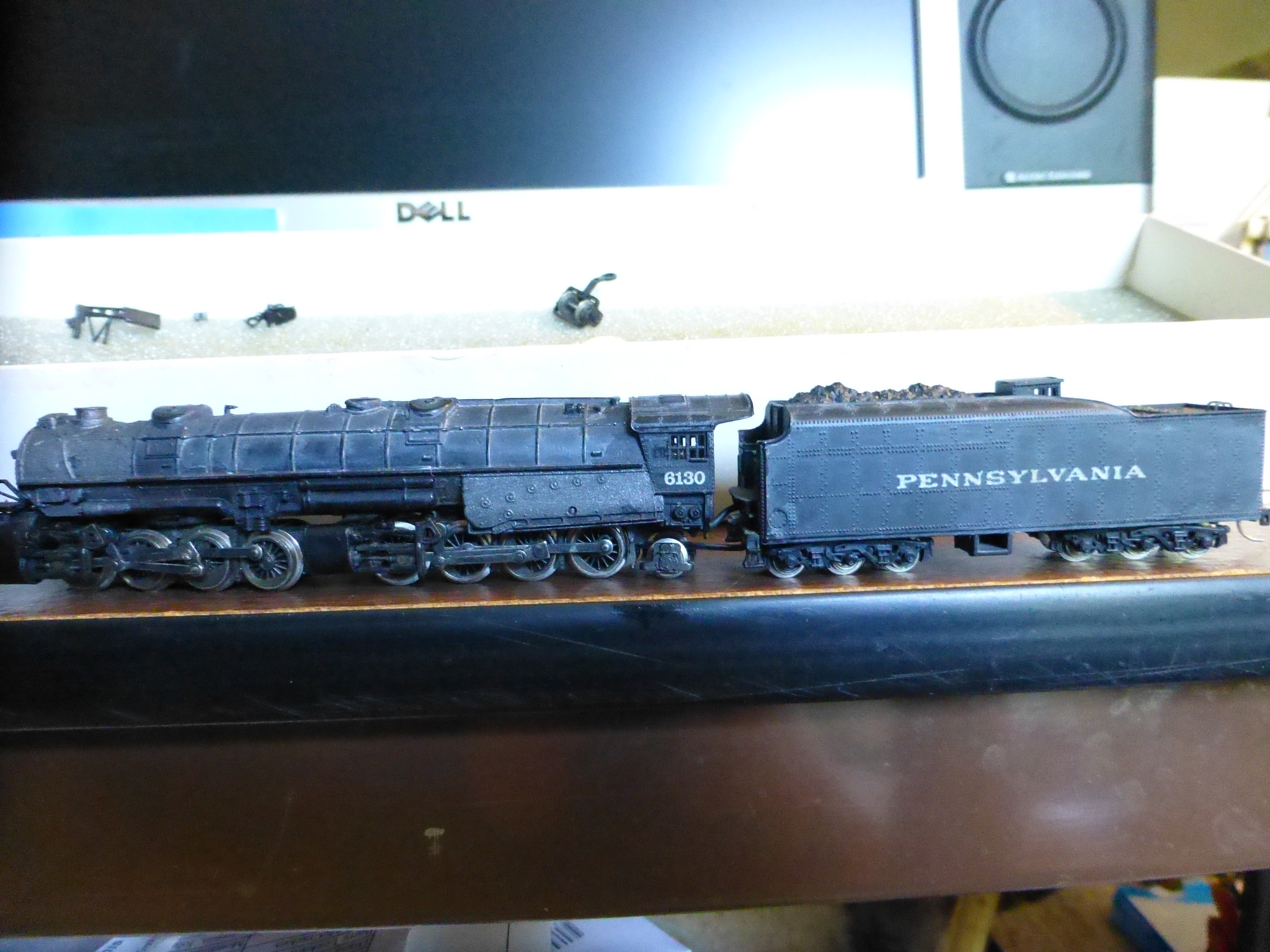 Last week’s post about the blinking beautiful O-gauge 4-8-4 Greenbrier got me taking a closer look at my assorted, hodge podge of model railway engines. I can go for months without ‘studying’ them per se. I realized that only had one N-gauge ‘Big Boy’, my favorite U.S. steam engine, on display. I knew I had two. I remember buying them. In the mid-1990s, during the Summer, July or August, there used to be a HUGE 2-day railway ‘show’/sale at Kingswood School, in Wolfeboro, N.H. Matthew, who was about 4 at the time, and I would go and spend hours at the show — always going on both days. The mid-1990s was also when I aws working like crazy and money was never an issue. So I would buy anything and everything that caught my fancy. I had bought these two ‘Big Boys’ at one of those shows.

Found the second one. Realized why it was not on display. Matthew had broken the front-end. That is OK. They are meant to be used and I have broken plenty of toys.

I don’t need the damaged N-gauge. Doubt whether I will ever again do N-gauge. Z-gauge is my poison. So I am going to list this, as damaged, on eBay. IF I can get a few dollars for it I might use the proceeds to get a new camera. 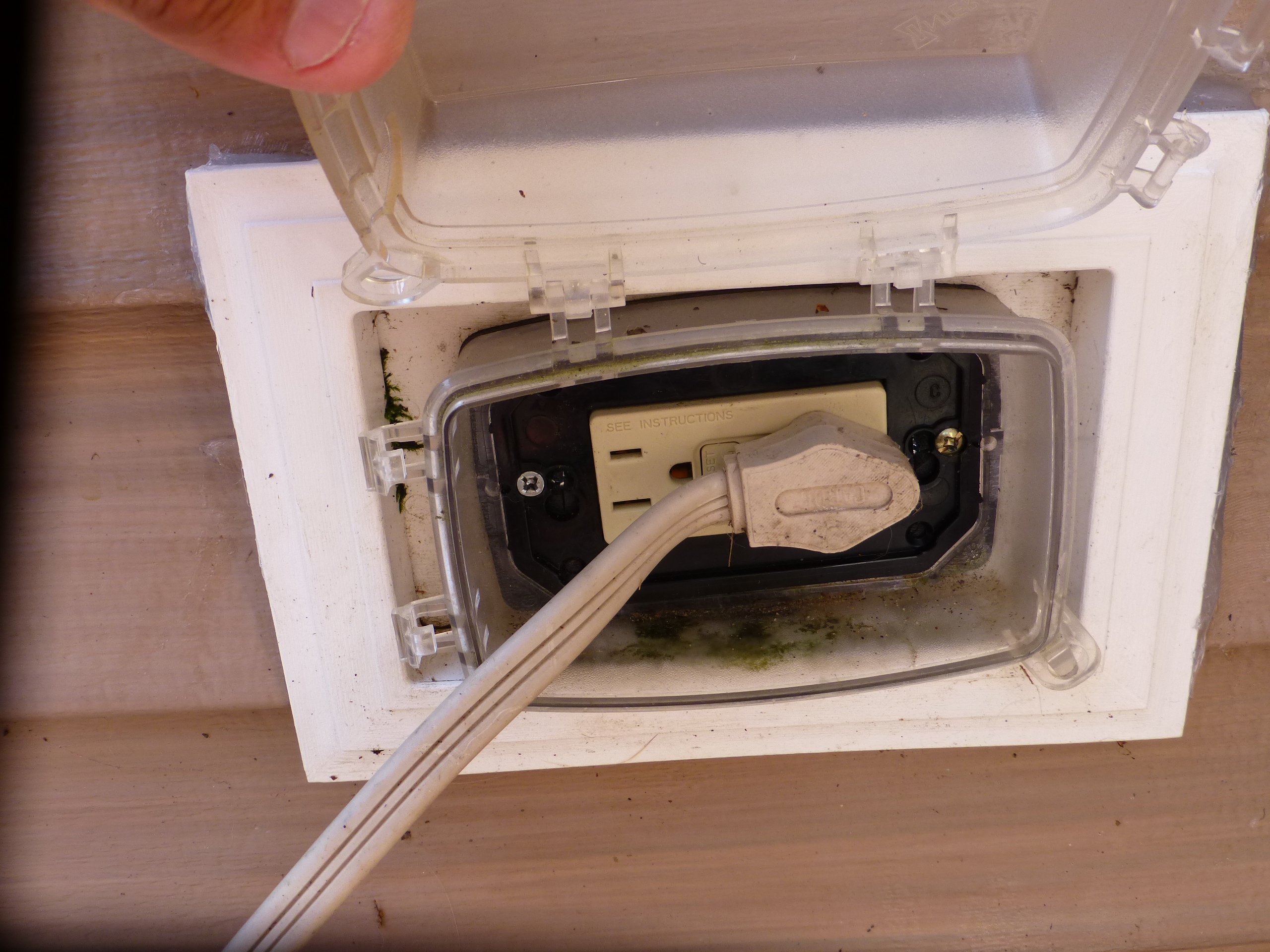 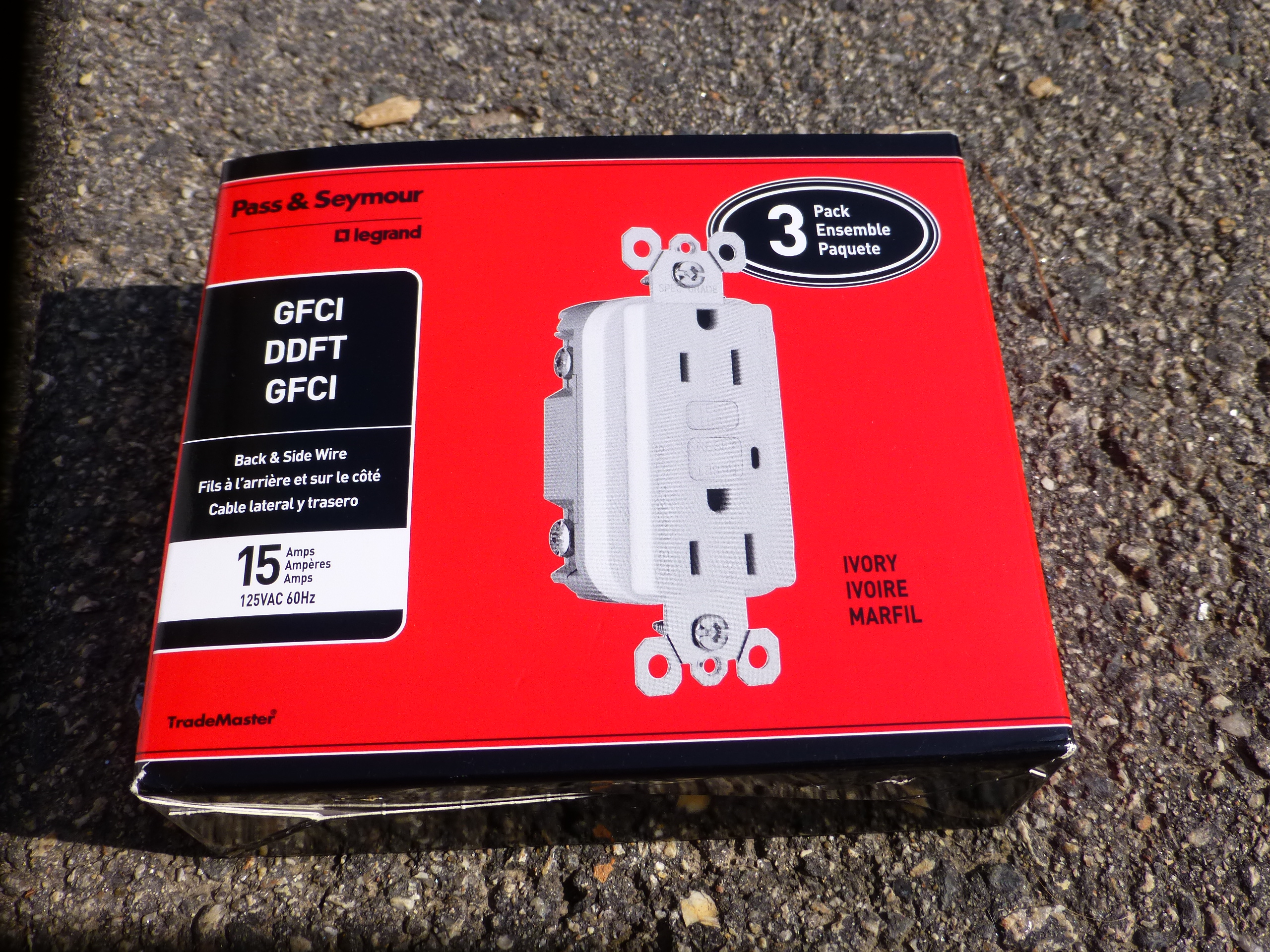 The good news is that it is ‘piece of cake’ to replace.

I had never replaced one, had no idea what to expect, BUT yesterday, I was able to successfully get the whole thing done, and add additional weatherproofing, in less than 20 minutes. I was happy. That is why I wanted to share this with you.

OK. A couple of caveats. Don’t mess around. Turn off Mains Power at the Source, i.e., main box. Plus if you are NOT comfortable with messing around with mains electric call an electrician. Though I don’t dwell on it often I do have a B.Sc. (Hons.) degree, from the University of Wales, in Computer Technology — and the ‘technology’ vs. ‘science’ appellation denoting that nearly 50% of this degree was hardware, i.e., I had to do a ton of high faulting electrical and electronic engineering. So I do know my way around ‘electrics’.

This house was completed in October 2006. We bought in in late February 2007. Since it had been built as an investment property, in many cases, as the ‘Home Inspector’ repeatedly pointed out to us, they had exceeded ‘the code’ to make things look ‘good’. That is definitely the case when it comes to the electrics. We have a surfeit of GFCI and other ‘circuit interrupters’ all over the house — including all the bedrooms. I sometimes think that I will trip some circuit if I sneeze too hard. Actually I am glad. Kind of makes me feel good that it is unlikely that we will have an electrical fire because of any circuit loading.

Well we have, and I haven’t really counted, four or five dual, weatherproof, GFCI external outlets around the house.

About 2 years after we moved in we discovered, to my chagrin, that the outlets on the uncovered deck (as opposed to the covered) had stopped working. I didn’t bother to do anything because we never had a real use for those outlets. Plus the outlets on the covered part of the deck are close by.

We do, however, have a dual outlet by the garage door that we use all the time. In the Summer Deanna runs one of her fountains off it and we use it to power the Christmas lights. About a month ago, maybe slightly longer, it stopped working — after a rather major storm. Tried all the tricks including liberal dousings of WD-40. Checked the Web. Appears that the outlet per se can die if there is moisture build up behind it — within the enclosure. That was very likely. Though they are supposed to be ‘weatherproof’ I can definitely see moisture getting in. That there was a significant amount of algae and moss growth around it kind of attested that water must get in.

On one of our many trips to Concord, N.H. I stopped at Lowes, which is conveniently next door, to ‘Market Basket‘, and went looking for replacement outlets. Though I have decided, after many years of research that I am a ‘Home Depot‘ person, I do find that Lowes is better for any and all things electrical. Finding the GFCI outlets wasn’t as easy as I had hoped. No, there was nobody at the store who could help me. I quickly worked out that I did NOT have to buy a complete weatherproofed kit for upwards of $20. All I needed was a ‘standard’ all purpose, internal/external dual GFCI outlet. Ended up buying the 3-pack, for ‘$29’, because I knew I also needed, at some point, to replace the dead one on the uncovered deck. I think a single one was around $11. So it made sense.

OK. In my case it really was ‘plug-and-play’. When I unscrewed everything and pulled the receptacle out, I noted, to my delight, that the wiring layout of the new unit was EXACTLY the same as what I was replacing. So I didn’t have to do anything. Just unplug the wires from one and plug them into the other. There are 5 wires in total, including the ground. Really was a piece of cake.

I went further and added liberal amounts of thick, transparent sealing above the box. Yes, there was a vinyl lip but I think, in time, water will seep through.

So that is the story. Hope this helps.

We, quite simply put, are unashamed, uninhibited Revels junkies.

We can’t get enough. Christmas Revels, at the delightful Hopkins Center in lovely Dartmouth, N.H., is a treasured, much anticipated and savored highlight of our rather busy Decembers.

That Revels North, to their credit, is taking us back to Merry Ol’ England for this Christmas made my week.

Yes, we tend to be ‘traditionalists’ when it comes to Christmas Revels. So, while we have enjoyed Mediterranean Revels in Cambridge, MA in 2011 and Irish Revels in 2012 we will readily confess that given a choice we will always plump for an English setting. There is an undeniable  je ne sais quoi to having the Morris Dancing, sword dancing, the Mummers etc. in what is basically their Home Setting.

So we are delighted.

Yes, we will be there with ‘Bells On’.