Polish Dziwisz, ‘Stanis-Break-the-Law’ Dziwisz As I Refer To Him, Is A Reprobate, Nothing But A Common Weasel For Violating John Paul II’s Wishes.

I have railed about ‘Break-the-Law’ Dziwisz for years. I refuse to call him Cardinal. I even refuse to call him by his full name. He only deserves to be called, at best, just plain Dziwisz. I even go to the extent of even ‘bleaching out’ his name when I write about him. See below. That was from April 24, 2011 and the title of the post was: “John Paul II Re-Interment, Post Beatification, Goes Against His Will — Again!”

I also railed about it in my ‘Next Pope‘ books.

In my books and where I come from you don’t just cock a snook at a dead person’s written, legally legitimate will — pope or no pope. Period.

Dziwisz is a crook. He is doing all of this for personal gain, in much the same way he collected the pope’s blood and blood soaked clothing when he was shot — so that he can sell it at a later date. I wrote about all of this years ago. Dziwisz was on my radar. Despicable little man.

Another of my posts from “popes-and-papacy”.

So where is God when you need him?

If anybody deserves to be struck down by lightning it is this guy.

Shouldn’t John Paul II, supposed to already be by God’s side as a Saint,
be doing something about this blatant violation of his will as stated in his Will?

I happened to see a stunning commercial for the Boston performance, on TV, the day after we had attended the absolutely BRILLIANT UNH Chinese New Year gala.

I am tempted BUT haven’t made a move as yet. Tickets are not cheap and going to Boston (as opposed to Dartmouth, Concord, Verizon or UNH) for a show is quite a trek. But, it is on my radar.

Just wanted to share with you. Pity we can’t get them to N.H. — say the Verizon. The Verizon might be too small!

I Have Absolutely No Sympathy Or Time For CELEBRITY Drug or Alcohol Addicts. Bunch Of Spoilt, Cry-Baby Losers.

I actually liked Philip Seymour Hoffman. He was one of the very few actors that I recognize. Though I watch movies every night, on TV, I am beyond useless when it comes to identifying and remembering actors and actresses — unless they are mega famous and I have seen them in at least 20 different movies. I drive folks, especially Deanna, nuts — because she was talk about so and so, and I will have no idea as to who she is talking about. The best that I can do, most times, is to say, when watching a movie is: ‘didn’t we see him (or her) in another movie recently’. Anyway, Hoffman was one of those that I kind of knew who he was — though until his death on Sunday I had no idea as to what his name was. That said. I am fed up of hearing about his death. As far as I am concerned he was a loser and I don’t like a monkey’s that he died. If he was stupid enough to be a drug addict that is his problem. Yes, I feel bad for his three young kids — BUT he should have thought about that.

But, before you start piling on me for being crass and insensitive, check the title. My gripe is with CELEBRITY addicts whether they be the Beatles, The Rolling Stones or an actor.

I can fully relate to ‘normal’ folks, struggling through life, turning to alcohol or drugs to assuage the pain. That is my feeling when some rich, famous celebrity starts going ‘woe is me’! I just want to yell: ‘Hey, try MY LIFE for a day and see how YOU like it’. My attitude, as with most things, is quite simplistic. If I can struggle through my life without recourse to drugs and booze, you too should be able to.

[[And yes in case you are thinking that I am an alcoholic, you should come and spend a day with me. For all my talk of wine, I only drink 1/2 a glass of red wine, diluted, a day. If I am at a restaurant the most I will drink is one glass of wine. I never did drugs though I hung out, daily, with some very heavy drug users. I refused drugs because I liked my life and didn’t want to miss even a second of it through an impaired state of mind! Yes, I was weird even when I was young. So, basically I didn’t do drugs because I was scared that I might miss experiencing life like it was.]]

Yes, I also know that money doesn’t buy you happiness, but having hung around some very rich people, I also know that money helps you to be miserable in grand style. And that is what bugs me about these idiots. What is your problem? Walk in my shoes for a 1/2 mile. [[Yes, I know there are folks in worse straits than I, but it is all relative.]]

Anyway, all these media coverage over the last 48 hours just bugged me. No sympathy. IF he was a homeless vet, I would feel bad. I might even feel guilty that I should have tried to help. This guy withdraws $1,200 from ATMs within an hour and uses that to buy drugs. How many homeless people did he walk past? He should be ashamed. Maybe if he gave to the poor, on a regular basis, he might have realized how good he had it. 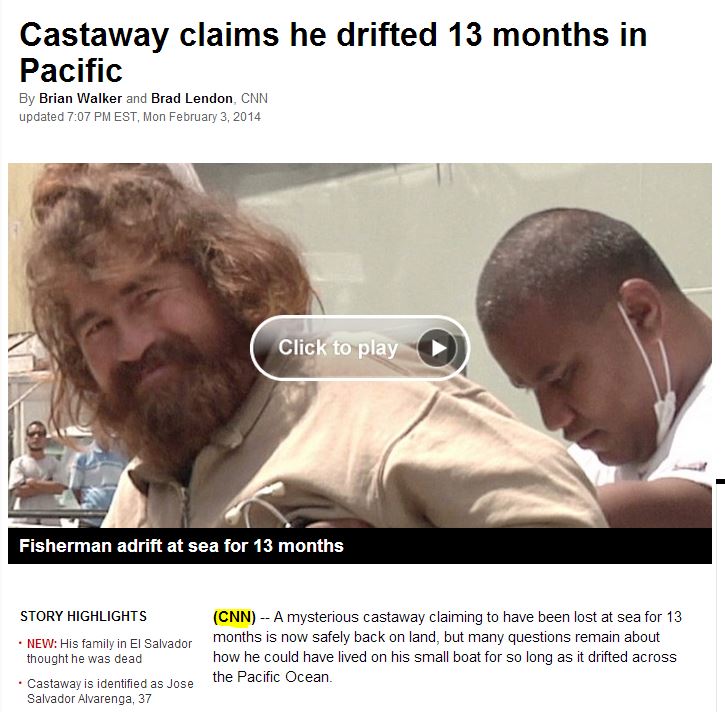 Click to ENLARGE. Use links below for more details if you are not familiar with this book or movie.

The book, indubitably, is beautifully crafted. Absolutely gifted writer — Yann Martel. Reminded me of Amitav Ghosh — ‘The Circle of Reason‘, ‘The Glass Palace‘, ‘The Hungry Tide‘ etc. I was enjoying the book until I got to the floating island of ‘reeds’. I don’t like make believe impinging into my real life stories. So to me, it was downhill from there.

We watched the movie, on TV, last year. Devanee loved it. The tiger, understandably, scared Teischan. The cinematography of the movie, as has been readily acknowledged, was amazing.

So as soon as I heard about Jose Salvador Alvarenga, a couple of days ago, I thought of ‘Life of Pi’ — though the direction of drift was totally in the opposite direction, but I think that makes sense given that the tides must, basically, have a circular motion. Yes, that is indeed the case. So, north of the equator left-to-right and vice versa south of the equator — with twisting by the ‘shores’. So it all makes sense.

The guy looks remarkably well for somebody who was adrift for 13 months. Maybe he managed to keep his beard in trim with a knife. Doesn’t look anywhere close to as hirsutic as I had expected him to be. Maybe they gave him a quick trim soon after he was rescued.

I am sure somebody has already secured the book rights. That should be a good yarn — provided it is true. I just hope he doesn’t talk about floating islands or getting food from aliens.

I gave you a heads up on this cultural event a
couple of days ago.

Here are the details.

As I had predicted, and I have an awesome record
with getting NE storm tracks right on the money,
the Sunday snowstorm won’t hit Boston till late afternoon.
So YOU are going to be good. No snow in the morning.
Head to Chinatown.

Given that we have been repeatedly told that nobody at ACS bothers to read my stupid blog, it seems miraculously coincidental that after weeks, if not months, of the blooper on the Handbook Cover going unnoticed it gets fixed shortly after my post yesterday.

Well at least I blog which is more than you can say about the esteemed Superintendent who hasn’t even bothered to provide an update on what happened on Saturday’s deliberative session. His last blog entry was on January 24, 2014.

Interesting picture of the school. Does anybody know the provenance of this picture. I just e-mail a bunch of officers at the Alton Historical Society asking whether they knew. Looks like a church building. It could be today’s Community Church or the church on Church St.

Seems ironic that they would put a picture of a 2 story Alton School on the Handbook Cover. They must be trying to send a subliminal message — though that seems way too progressive for this administration.

I got this update on the provenance of that picture.

That appears to be a drawing, done to look like photograph, of the old Alton Central School on School Street before additions were added to the sides. That building no longer exists, it was replaced by the current school in the same location.

Why Is Verizon Wireless Arena (Manchester, N.H.) Promoting The “Bruno Max” Concert With A Picture Of Him Seductively Stroking His “Inside Leg”!

Given how much Devanee and Deanna raved about “Bruno Max”
re. Sunday’s Super Bowl halftime show
I would have got tickets for this concert.

But, I have enough ‘troubles’ with my 13 year old without
taking her to a concert where she is going to see more of this?

I, better than most, appreciate that us men do get the urge to itch,
BUT in a poster …

This was unnecessary, unbecoming and immature.