The Grand Canyon Experience Keeps On Getting Better Over The Decades. Better Now Than It Was A Decade Ago. 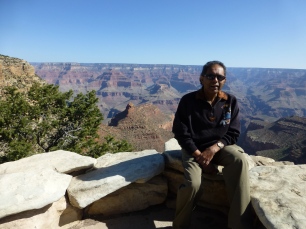 A few of you may have noticed that I had not done any posts for nearly 5 days — finally doing one late last night. That was because we were at the Grand Canyon, this having been vacation week in northern New Hampshire. It was the first trip to Arizona for Deanna and the two younger kids. I, on the other hand, have spent a lot of time in AZ starting in 1980 — doing a ton of work for ITT Courier (in Tempe) and POS equipment manufacturer Hyperterm. I can’t remember whether this was my eighth or ninth trip to the Canyon since I used to do daytrips from Tempe to the Canyon and back. I first visited in the Summer of 1980. My last trip prior to this was in February 2001, with the two older kids, when we took a helicopter from Las Vegas to Western part of the Canyon. My last time to the South Rim village was in 2000.

The Canyon, of course, despite the inevitable but not perceptible erosion, remains unparalleled and breathtaking. That is my metric. It took my breath away the first time I saw it, though I had steeled myself to be ‘cool’, and it has taken my breath away each time I have seen it since.

But, the whole Grand Canyon tourist experience has got much better over the years and I am so delighted by what I saw and experienced this last 4 days.

South Rim, from the Village, opposite Bright Angel Lodge, with the Lookout Studio (with the white roof) to the left. All pictures (or at least 99.5% of the 1,571 that were on the 3 digital cameras) by Deanna. All the pictures will ENLARGE if you click on them.

Teischan’s first view of the Canyon. She wasn’t sure how to frame and process what she was confronted with. She seems to be pointing at it. This is smack dab in the middle of the Village. Right opposite Bright Angel Lodge.

From my perspective here are the things that have changed for the better (and all involved, in particular the Park Service and Xanterra South Rim LLC (which runs all of the hospitality services including the lodges and eateries) deserve kudos.

1. Concerted emphasis on ecology, conservation and all things ‘green-related’: A lot of what they (in particular Xanterra) is pushing and enforcing at the South Rim should be the order of the day right across the world. They no longer sell bottled water at the South Rim and proactively discourage the use of plastic straws — with the servers at some of the restaurants wearing big ‘STRAW FREE’ pins. I have never understood people’s fascination with bottled water. Now at the South Rim they were enforcing what I have always believed in and advocated. Use reusable bottles and fill them up from a tap (and here I am talking as one who nearly died, when I was about 12, from drinking contaminated water from a rainwater barrel).  I had never really thought about the straws but that makes a lot of sense too. Altogether the unremitting messaging about conservation and saving the planet was positive and was never grating. This messaging should be universal and not just limited to the Canyon. I have never been prouder of the Park Service — and I have always had a soft spot for them.

2. Total eradication of noise pollution: Wow. The thing that I most savored was the deep, profound silence of the Canyon. You could hear the silence. The total absorbance of sound was magical — and it isn’t as if I am subject to much noise on my dirt road in rural, central NH. What they have done, as they had wanted to do for decades, was to ban sightseeing helicopters and planes from the 50 mile, main section of the Canyon. What a difference. In the past you could never get away from the constant and annoying buzz and drone. Now, just white noise level ‘nothing’, occasionally punctuated by the harsh call of black crows (which they call ravens out there). We saw helicopters, but they were being used to haul heavy material to Phantom Ranch at the bottom for the start of the season. But, they flew far out and were not around for long. In marked contrast, sunset in Sedona was like being at an airport.

3. Proliferation of wildlife: The first morning as we drove up to the Village we saw a herd of Elk grazing by the railway line and the mule corrals. I first thought that we had lucked out. Not so. Elk abound. We even saw an Elk grazing away on the lawn of the famous El Tovar Grand Hotel. It has become like Yosemite or Skyline Drive. Come dusk Elk everywhere. Talking to a Ranger I discovered that the deer and the Elk have actually become a problem. Devanee heard that they are planning to plant a different type of grass in the Village to curb the migration into the very midst of the main tourist area. We also got to see a condor. 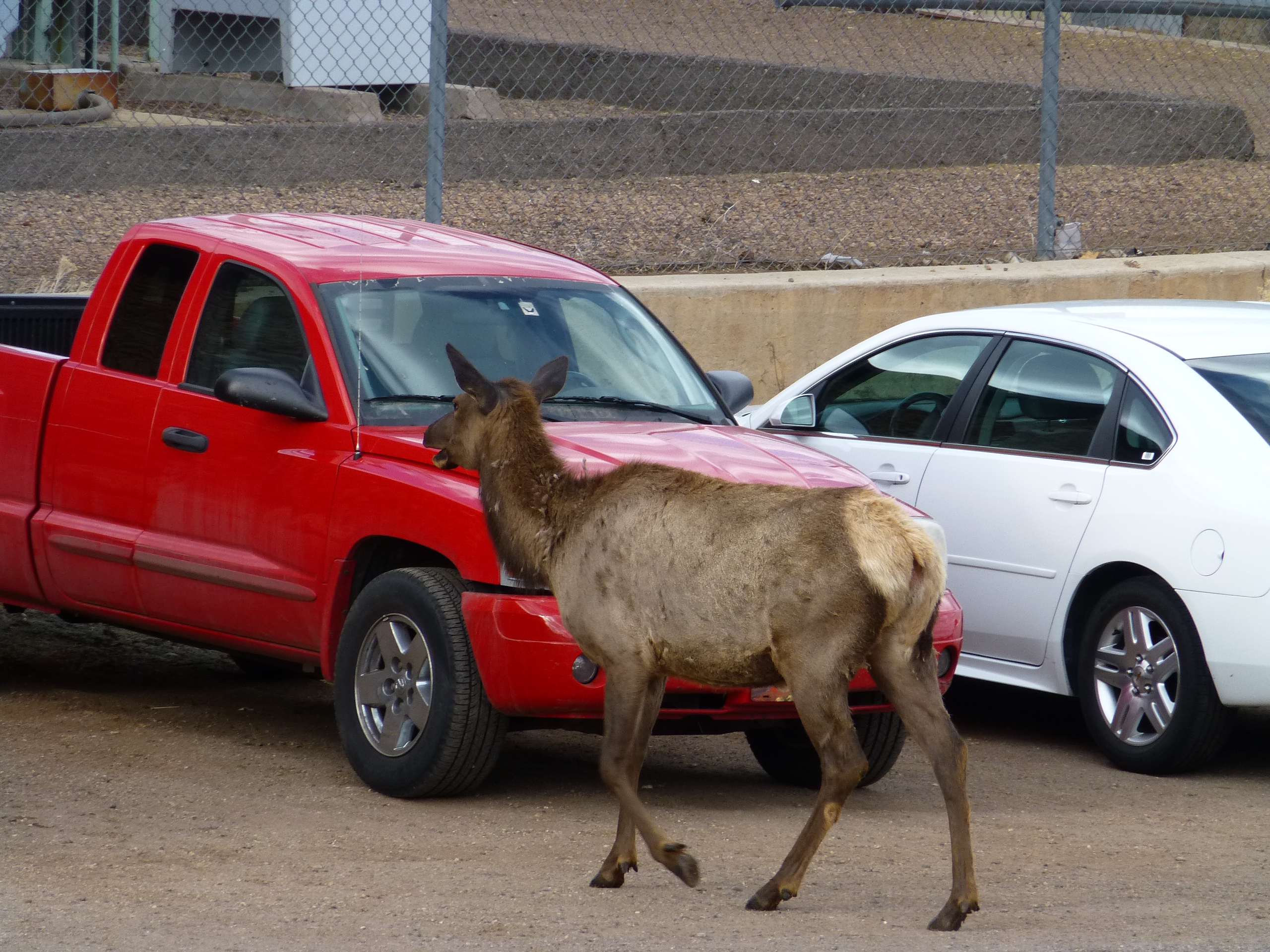 4. Reasonably priced food: The food prices, in general, were not that different to what you would pay at McDonalds! That was a pleasant surprise and respite. Makes a total mockery of the prices charged by NH ski resorts like Gunstock and Loon. The Grand Canyon really is in the middle of nowhere. Hauling stuff to it is expensive. So they could justify expensive prices. That they don’t is great. It is a pity that our ski resorts (and the NH Highland Games) just want to exploit the punters.

5. Use of natural gas powered buses and encouraging people to use them.

To be fair there was just one thing that I was not impressed about and it is one of my perennial issues with contemporary life – lack of a dress code in fancy restaurants. We made a reservation and went to dinner at the El Tovar. Now the ‘El’ is billed as one of the Grand Hotels in the U.S. and the dining room is classed as ‘Grand’. Well, the dining room and the service was immaculate, BUT having hobos coming into dine in shorts and T-shirts just detracts from the experience. Yes, I complained verbally and in writing.

The other thing that I noticed and bemused me is the mobile device addiction. You are at the Grand and people have their noses stuck on a small screen. It is a pity — though watching people take pictures using a 10″ iPad was cool, given the large viewfinder so to speak.

Overall it was a great few days. Deanna is still going: ‘Wow, Wow, Wow …’. The kids were overwhelmed. 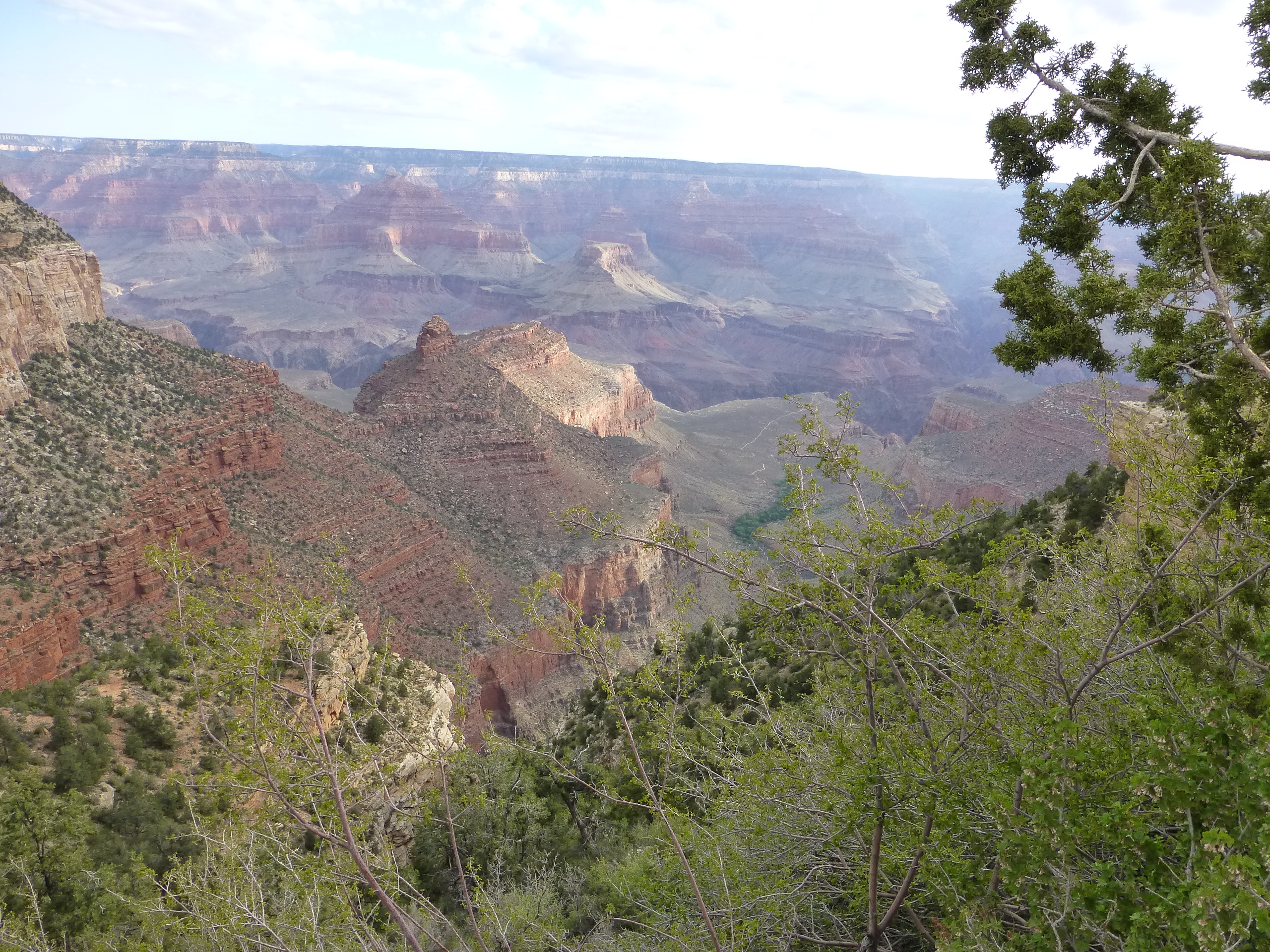 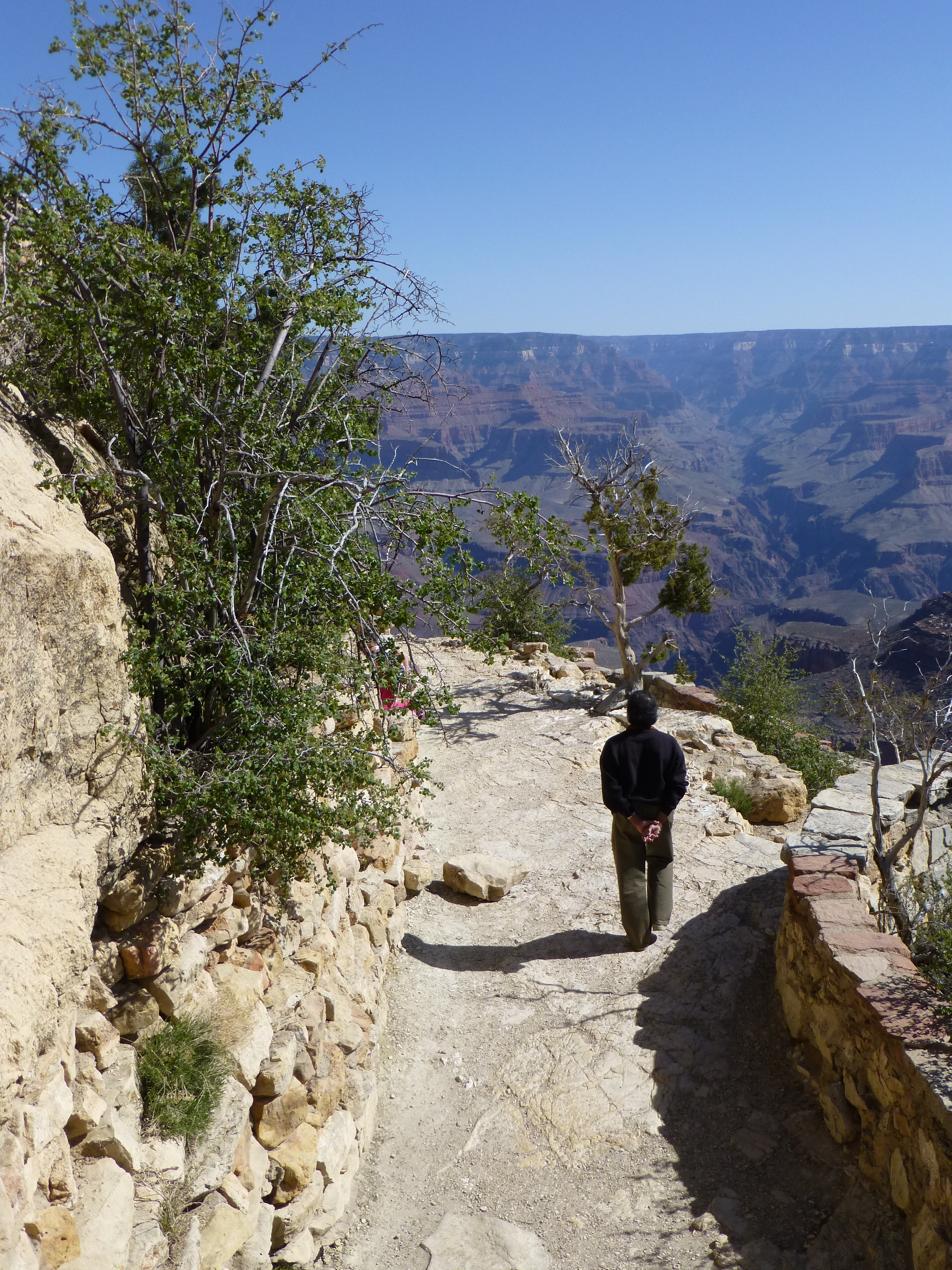 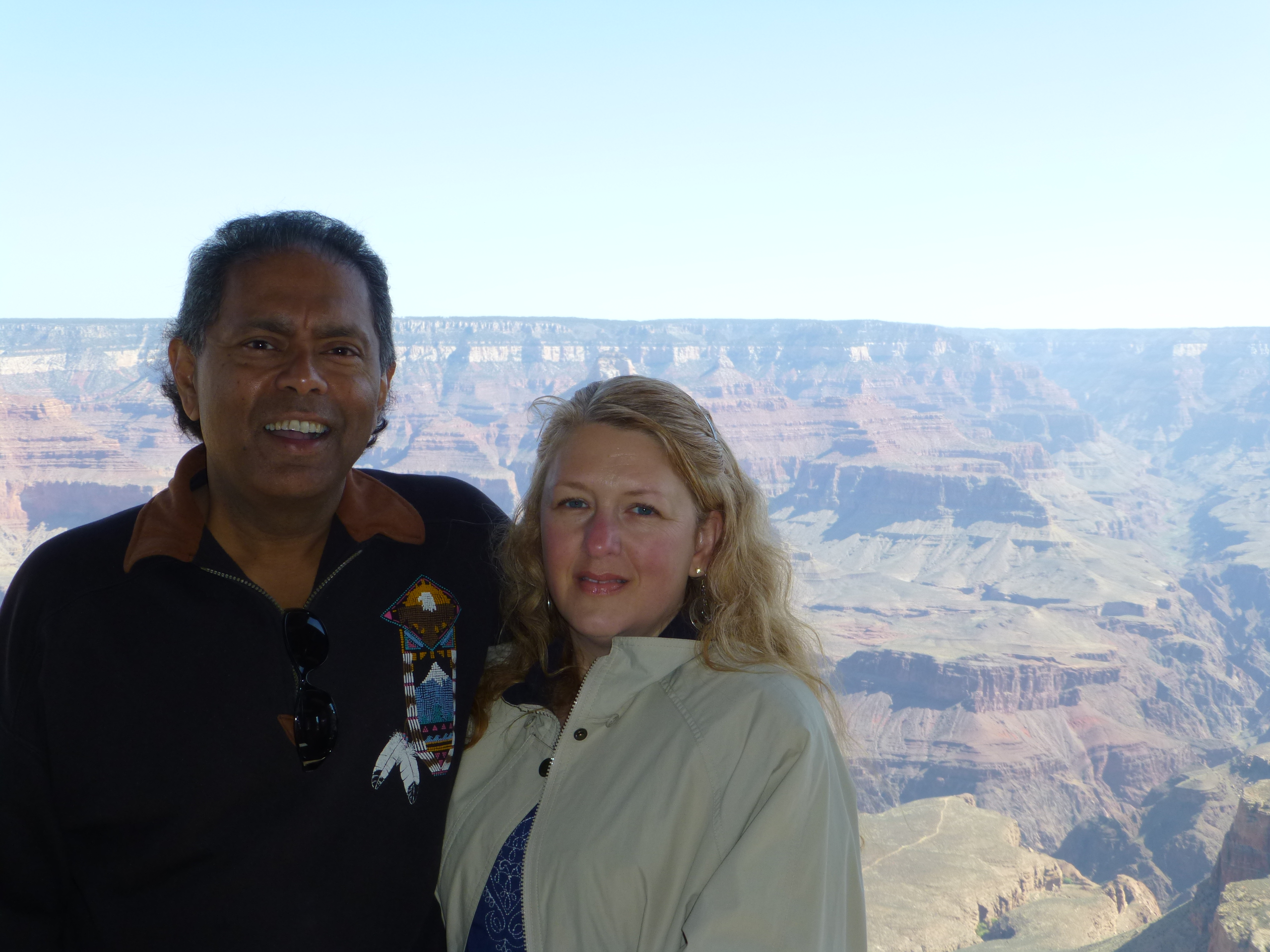