My earlier assertion that it was on Sunday, February 10, 2013 now appears to be wrong. As I state in the post, I knew it was the 2nd Sunday. Just to make sure I have been checking on a regular basis. Today I found 2 posts that state quite categorically, post-1 & post-2, that it is Sunday, February 17, 2013. That is also when they are having the parade in Las Vegas. So, that makes sense. Sorry. But, I was going by what I could find. We now need to change all our plans and we do have a conflict on the 17th, though China Town will win.

All these pictures are from New Year 2011 in Boston.
We ate at the Hei La Moon which has the big picture windows.
Yes, that is Teischan. Click to ENLARGE. 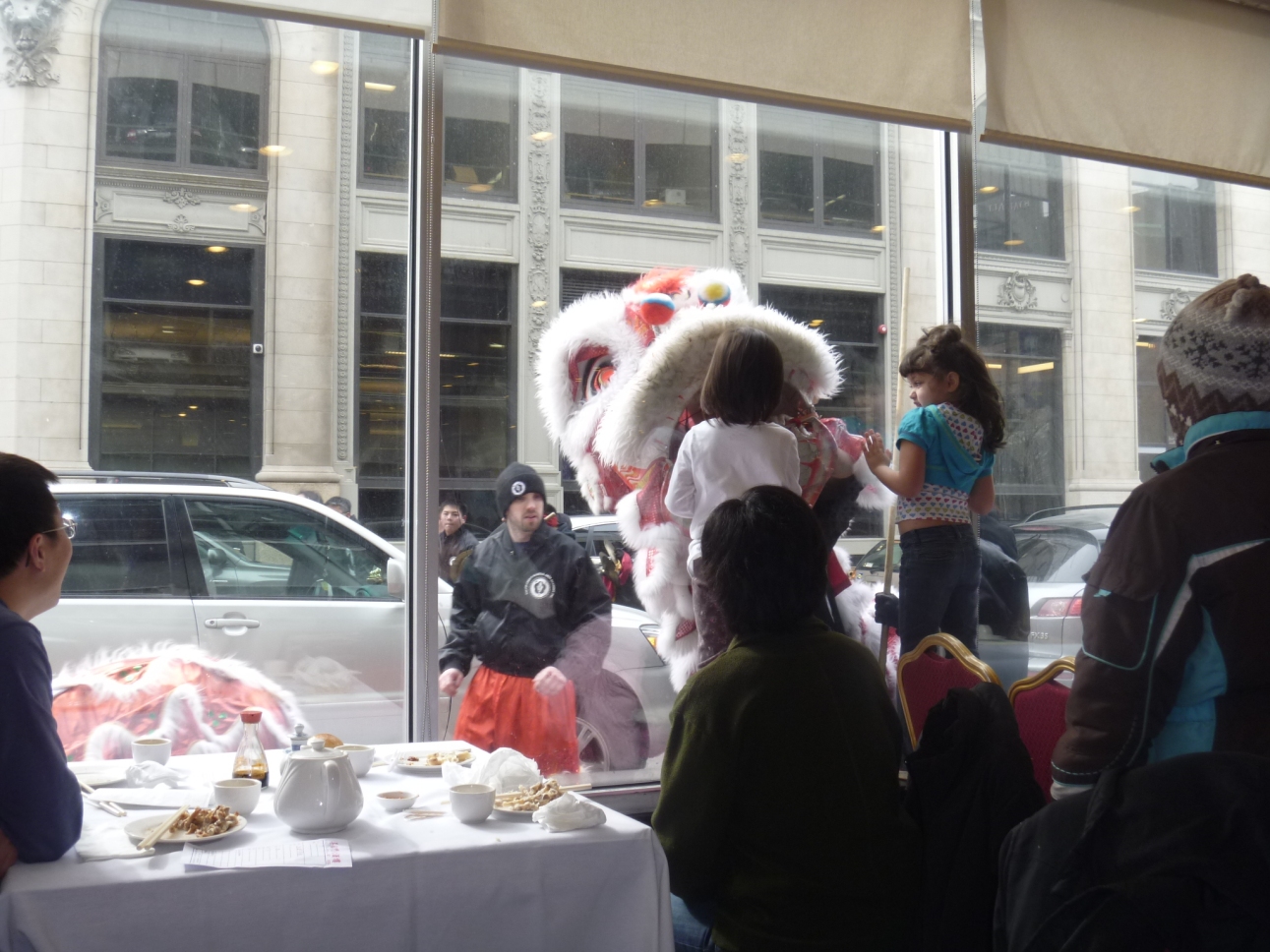 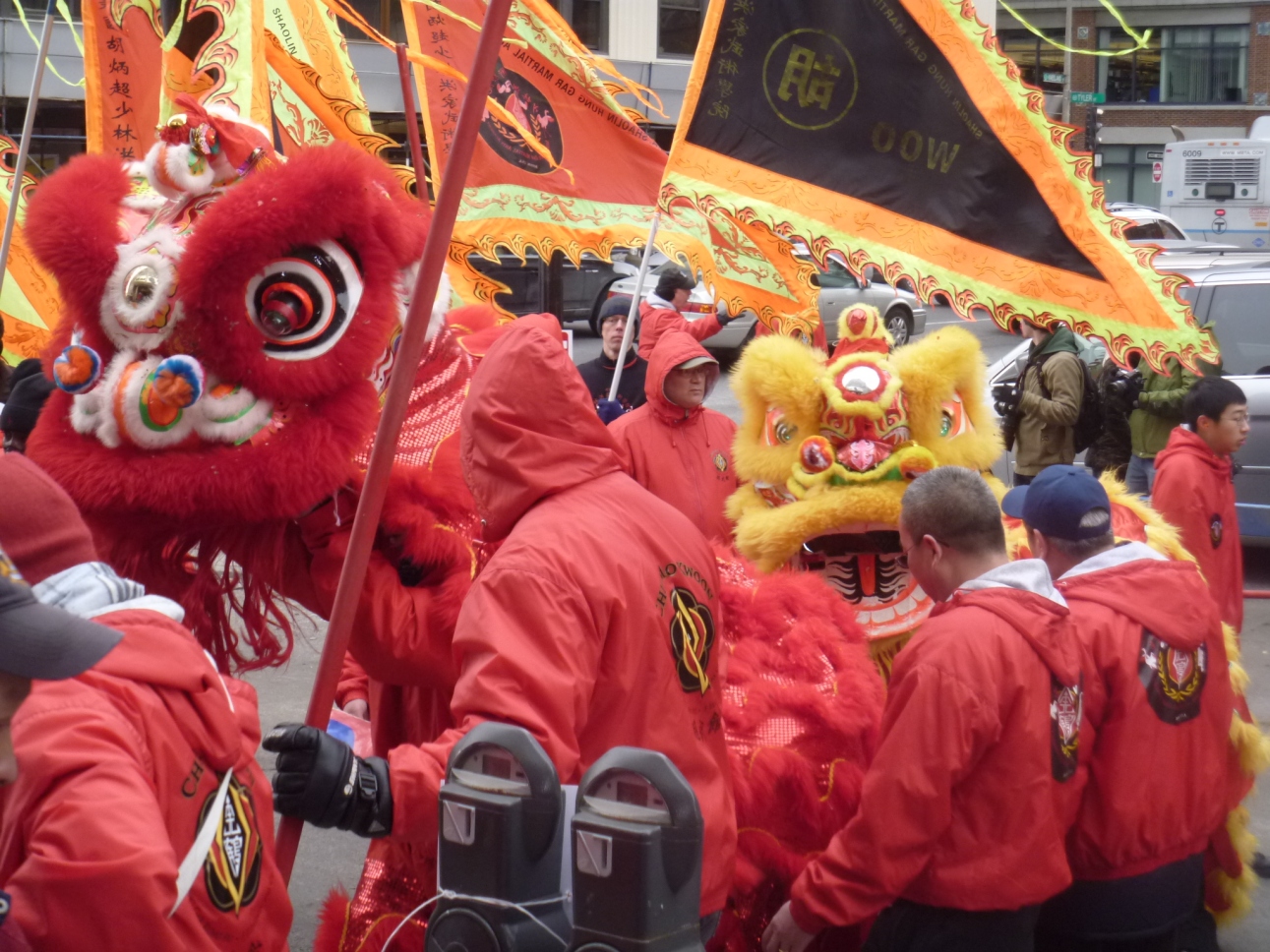 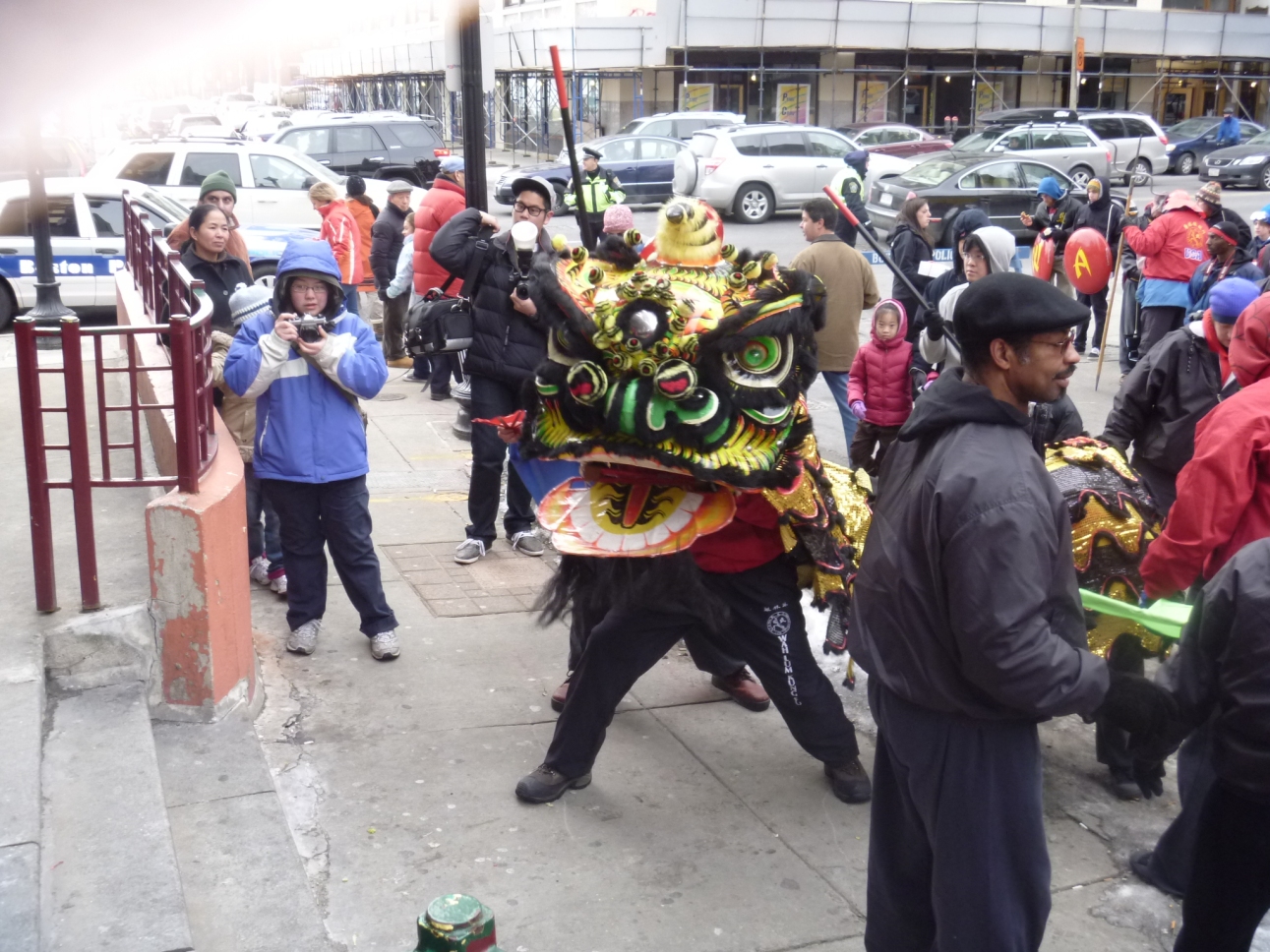 The Chinese New Year in Boston, with the 3rd largest Chinese community in the U.S., is great fun. We have gone down at least 6 or 7 times. The Chinese New Year, each and every year, spans 15 days. We, oblivious, used to go down on the 1st Sunday of that two-week period. It used to be fairly quiet. Then after talking to a few locals in pidgin English, which I am real fluent in (given that this is my second language), we discovered that: ‘no, no, not this Sunday. Come next Sunday‘. Aaah! The real celebrations are on the 2nd Sunday — and what celebrations they are. Wow, wow and WOW.

We went in 2011 — the day before Deanna went in for her back surgery.

It was beyond amazing. What fun. We saw at least 8, yes 8, different Lion/Dragon parades. We followed some. Saw the ritual with the red envelope and the animal trying to eat the fruit.

And then the Chinese crackers. Coming from Ceylon, from the 1950s to boot, I am very familiar with Chinese crackers. We used to use them with gusto and aplomb when I was a kid. But, I have never seen crackers in this quantity. They were unrolling them out by the mile and I kid you not — and exaggerate, if any, by not much. It was rolls upon rolls. The noise, the smoke, the atmosphere. Obviously China Town has impeccable relations with the City and Law Enforcement. Policemen were just lounging about. It was a real holiday.

It is a Sunday, so street parking in Boston will be free.

We couldn’t make it last year. I was bummed. It was the same Sunday as ‘The Wild Swans‘ play by the Educational Theatre Collaborative (ETC) at Plymouth State University and I had bought the tickets in November without checking when New Year was.

I like to celebrate as many New Years per year as I can. Yes, of course, January 1. Then, Chinese. [I am 1/16th Chinese — as you could probably tell from my eyes. My paternal grandmother was 25% Chinese and you could tell that. Very interesting lady. Very stately. Had real bad diabetes — hence why I wait to join the ranks.] April 14 is Sinhalese New Year — and the other 15/16th of me is Sinhalese/Aryan, as far as I know. We don’t really do anything on April 14, and Deanna always forgets. I would celebrate the Jewish New Year, but despite 25 years of extensive interactions with Jewish colleagues and friends I still get so confused by their holidays. I really must make an effort to sort them out.

If you would like to experience Chinese New Year 2013 in Boston, but feel kind of ‘intimidated’, drop me a line or leave a comment. I will try to help out. IF enough people are interested I might even consider taking a group down — and no, I am sorry, but I can’t afford to pay, though I would love to.