Our Coconut Thumb Pianos. You Should Try Them Out. Very Soothing. Sounds Good Too. 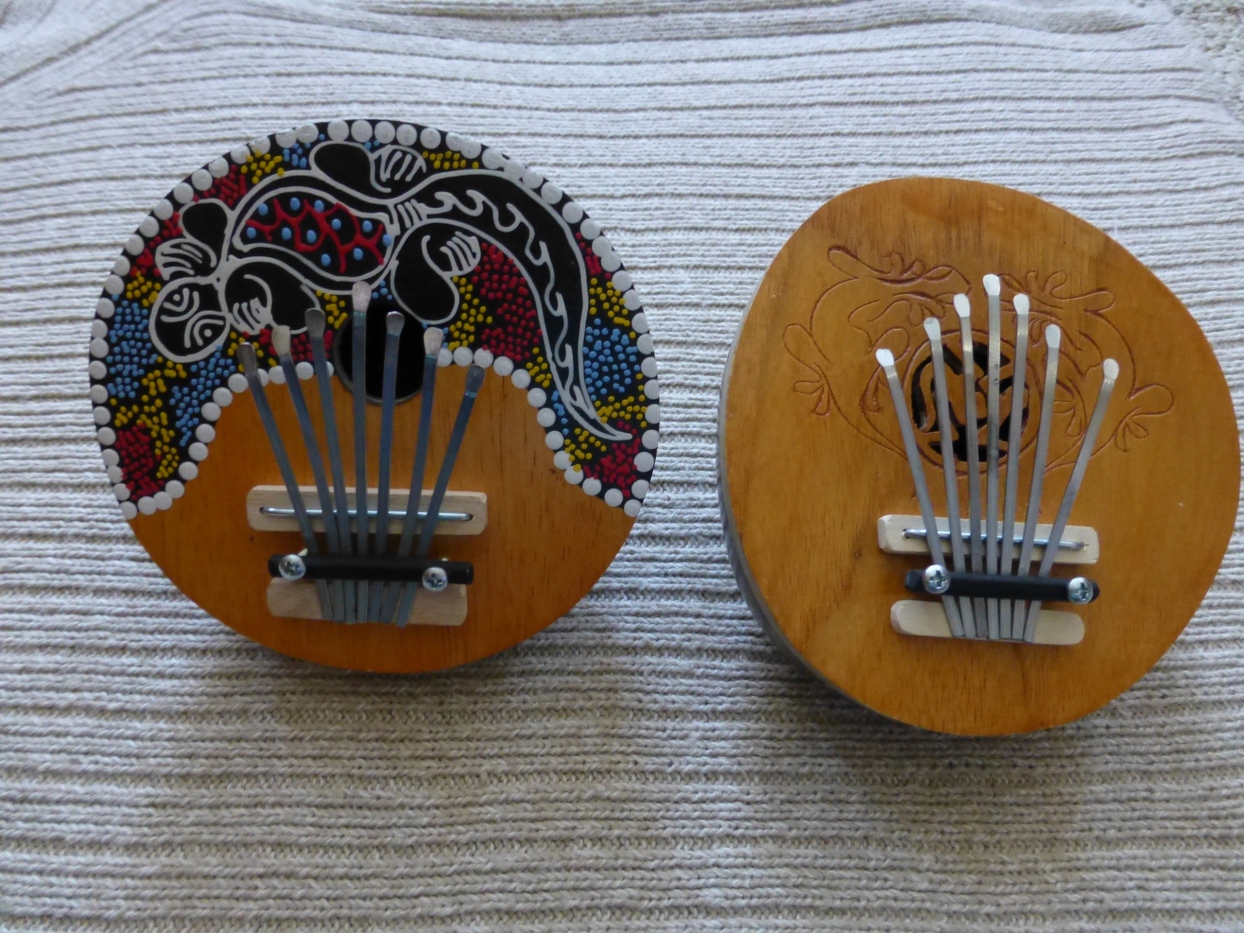 Click to ENLARGE. The two coconut thumb pianos. Mine is the plainer on the right. 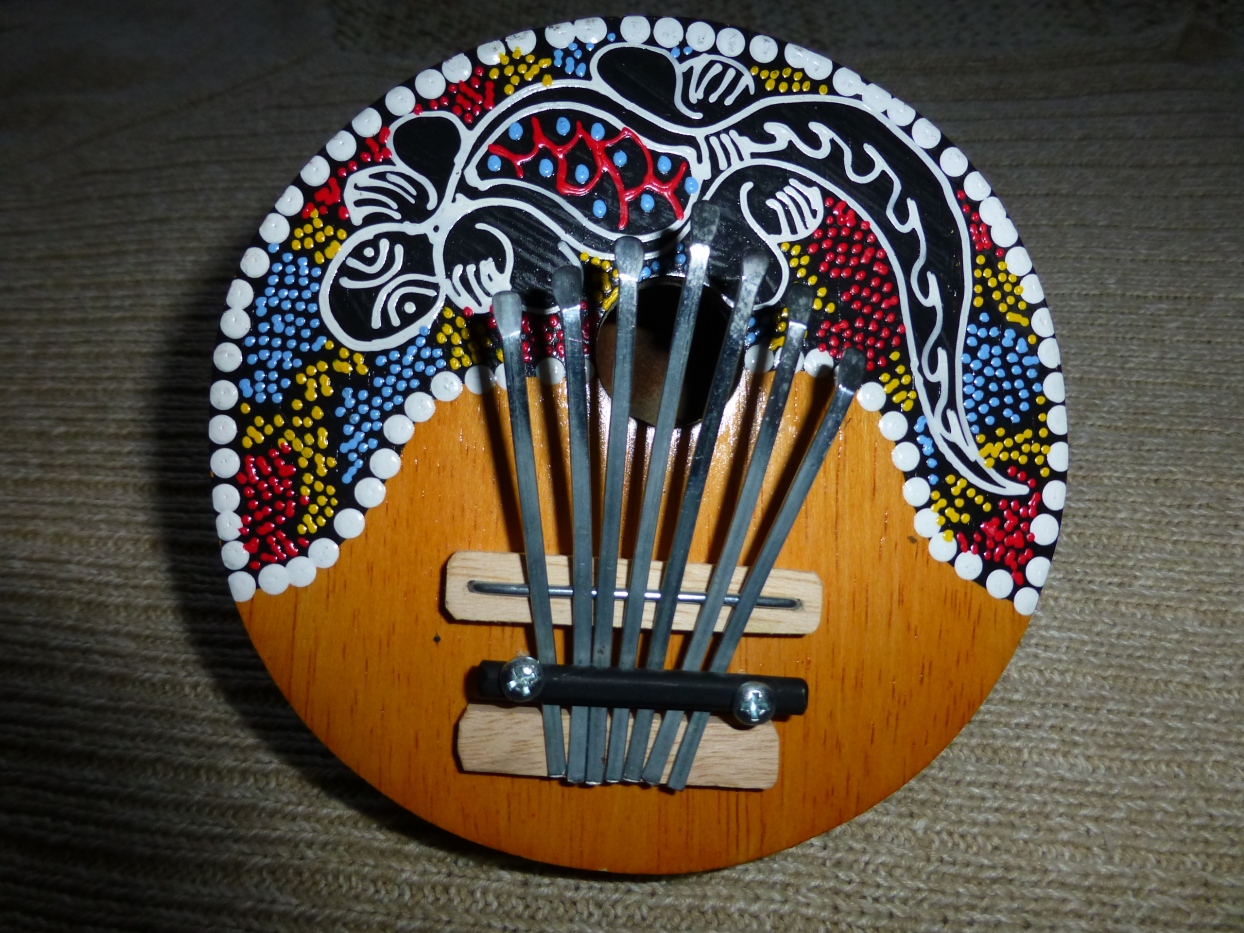 Devanee wanted a Caribbean steel drum for Christmas. So, I went shopping on Amazon, as is my wont.

I was going to start off with a table model. The price came as bit of a surprise. But, she definitely wanted one. [It is actually well made, sounds good and comes with instructions.]

As I was shopping, as is Amazon’s practice, they kept on suggesting other items — knowing my record, very well, of being an impulse buyer.

One of the things they flashed at me was the coconut thumb piano — the plain one. It was Christmas, so I added it to the cart.

When I opened it at Christmas, everybody wanted to play with it. Deanna wanted one.

I checked eBay. They had the fancy one, for a good price — which included shipping. So we now have one each. They are very soothing. Very compelling. We don’t know how to play them but thwacking the keys definitely cheers you up. Definitely recommend them. Nice to have around too. 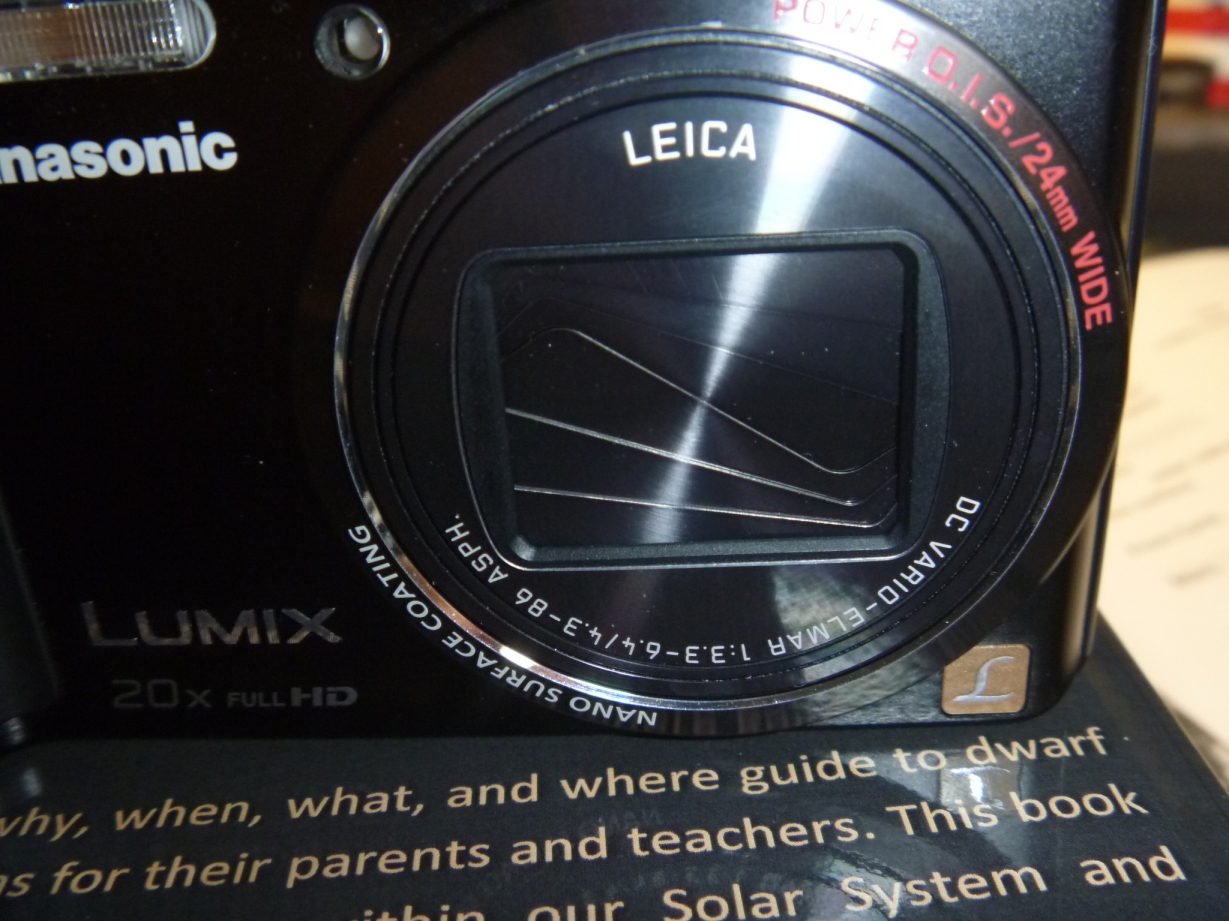 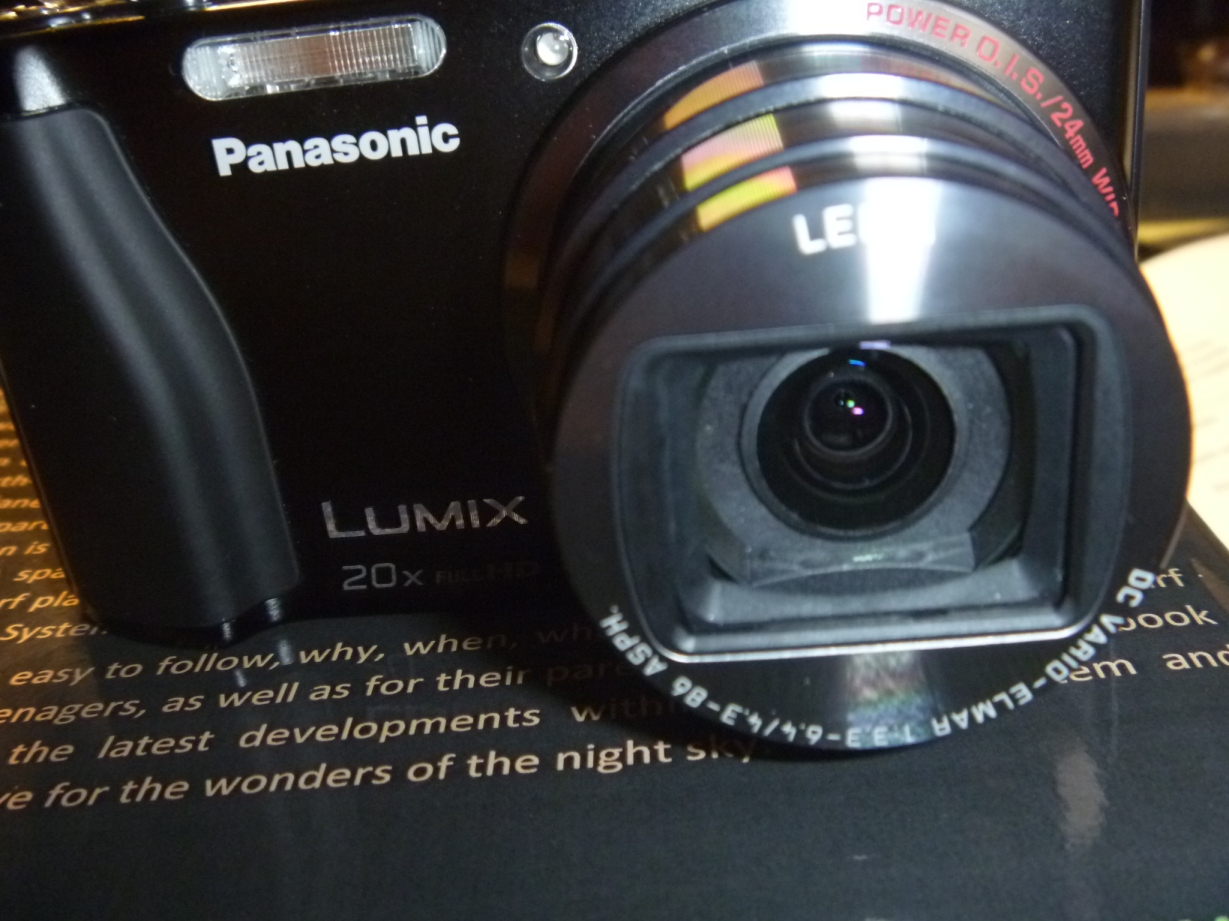 We were in awe of this camera. It took amazing pictures. We still hadn’t worked out all that it could do, or what it was automatically doing for us already. We were beginning to suss out that it, on its own volition, took multiple pictures in burst mode (and I think it can take up to 10 a second) and either just gave us the best or did an composite of all it took. It was pretty cool.

This morning we all hiked down to Halfmoon Lake through trails in the wood, sloshing through the melted snow. When we got to the lake Deanna took the camera out to take pictures. She though the picture in the viewfinder looked dark. So she happened to look at the front of the self-projecting lens. The lens cap was only 1/2 open! Not good. It wasn’t like it was cold. It was a veritable heat wave up here. It was probably 38°F. The second time she re-cycled power, it retracted fully. Then it happened again a few minutes later.

Not good. We have only used it for 20 days. Yes, it is an amazing lens. I have to assume that it has some kind of sealed lubricated mechanism. This camera, as far as we know, has not been dropped or abused. That comes later.

All said, we were not worried. I had got it from Amazon. The reason I insist that we buy through Amazon, rather than anybody else, is there superb customer care. To return it and ask for a replacement was effortless. Took less than 5 minutes in total, including printing the return barcode. We have had great luck with Amazon. So, as far as we know, UPS will come and pickup the return tomorrow. If things go per plan, we should have another one by next week. Yes, Amazon does ‘know’ me. It does keep track of EVERYTHING you do with them and I do more than just buy stuff from them. I have multiple sub-accounts with them for my book publishing, Kindle etc. Amazon knows all of that.

Well, I will keep you posted. 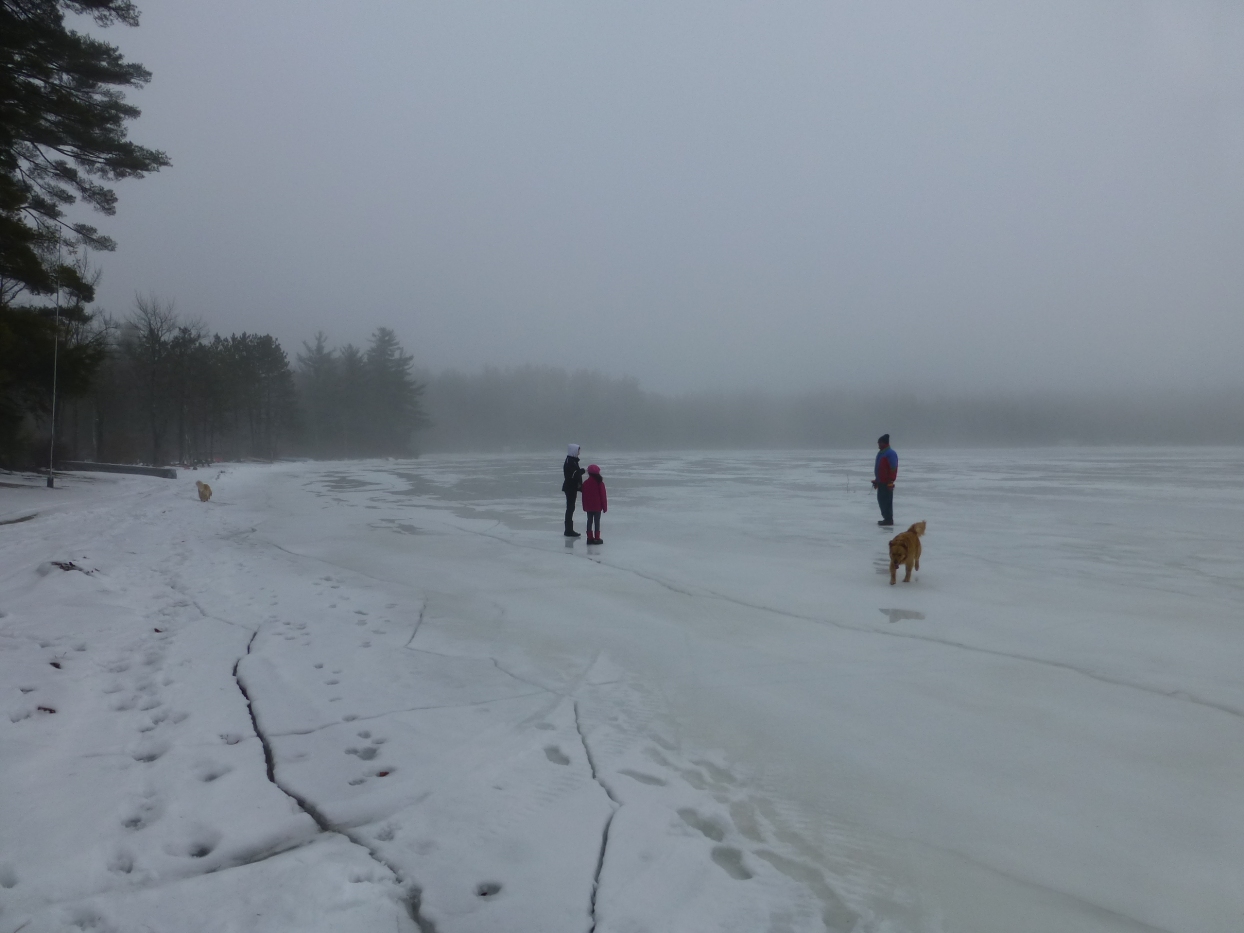 On Halfmoon Lake, Alton, NH, this morning. This was after Deanna got the lens cap to open. This is a very shallow lake. So my chances of falling in are remote.