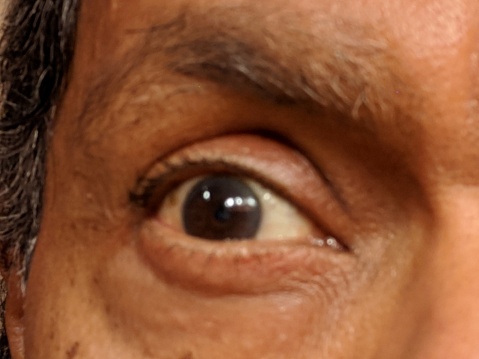 My right eye. Click to ENLARGE and get scared.

The 3rd lens! The other two in my eyes when picture taken.

This was SCARY and it has rattled I.

I lost my right contact lens on October 27. It was in my eye and then it went missing. Yes, I knew it could still be in my eye. I checked — multiple times, in the mirror and with my fingers pressing against my eye.

51-years is a long time. I do know how to wear and take care of contact lenses.

In those 51-years this was BUT the 2nd contact I had LOST! Of I drop them plenty. But, I always manage to find them.

So, losing this really upset I.

I had plenty of spares. Put a spare in. VERY comfortable.

7-days, NOT a single problem. No discomfort. No irritation. Could see FINE.

So, this must be the ultimate proof that I really am an insensitive jerk that feels nothing — not even two RIGID contact lenses in my right eye (and the human cornea is rich in nerve endings).

This morning I woke up and it felt like I had an eyelash in my eye.

But, I also noticed that I could read the TV banners fine with my right eye. That puzzled me.

Went to wash my eye to get the eyelash out. Could see a reflection.

Checked my contact lens case. There were two lenses in them. So, I had taken two out last night.

Yes, there was ANOTHER in there.

This scares me. A full week. I didn’t feel it.

I Returned My MARQ Expedition & Am Getting A Second Fenix 6 Pro — This One In Titanium.

Putting the MARQ to bed (or at least into a box).

I had it for 5.6-months. When I got the MARQ I was so happy and excited and I thought I would keep it forever — and I did have a Rolex that I kept for 22-years before giving it to my son.

The MARQ software had issues. Some of it probably because I insisted on using my preferred (customized) ‘ActiFace‘ watch face rather than one supplied by Garmin. But, last night was the last straw. All of the MARQ conniption appear to happen AFTER I finish a walk — whether as a GPS activity or just walking 1,000+ steps without invoking ‘walk’. Well, last night, after my 11pm walk, the bloody thing beeped and squawked and the next thing I knew it appeared to be LOCKED. Finally worked out that it had gone into ‘battery saving mode’! Ah! I had charged it, 100%, 11-hours earlier. Battery was down to 14% and I had the Pulse OX off. Well, I wasted 30-minutes getting things back to normal and I then had to charge it again.

That was IT. I had enough.

Prior to that, at least once a week, after one of my walks I would lose ActiFace. It would take 15-minutes to get it back. There never was one guaranteed solution. Required me trying this that and the other.

Yes, IF I also did NOT have a Fenix 6 Sapphire I would not have known any better …

But, to be fair, there was a reason I had got a Fenix 6. The MARQ never felt robust. I had vision of it dying — totally, as had two Vivoactive 3s. This time around I did not want to go for 4-days without a Garmin to track my activities. So, I had decided that I am always going to have two Garmins around.

The Fenix 6 is head-and-shoulders better than the MARQ Explorer (now called the ‘Adventurer’). The software is more reliable and the display is much, much, much, much better.

Hence, why I am getting another Fenix 6. This one in Titanium. NO, I will not be wearing the orange band. Instead I will use a $22 leather band from Amazon. They look real nice on the Fenix 6.

Well, I will keep you posted.

I do keep track of my Activity Trackers. 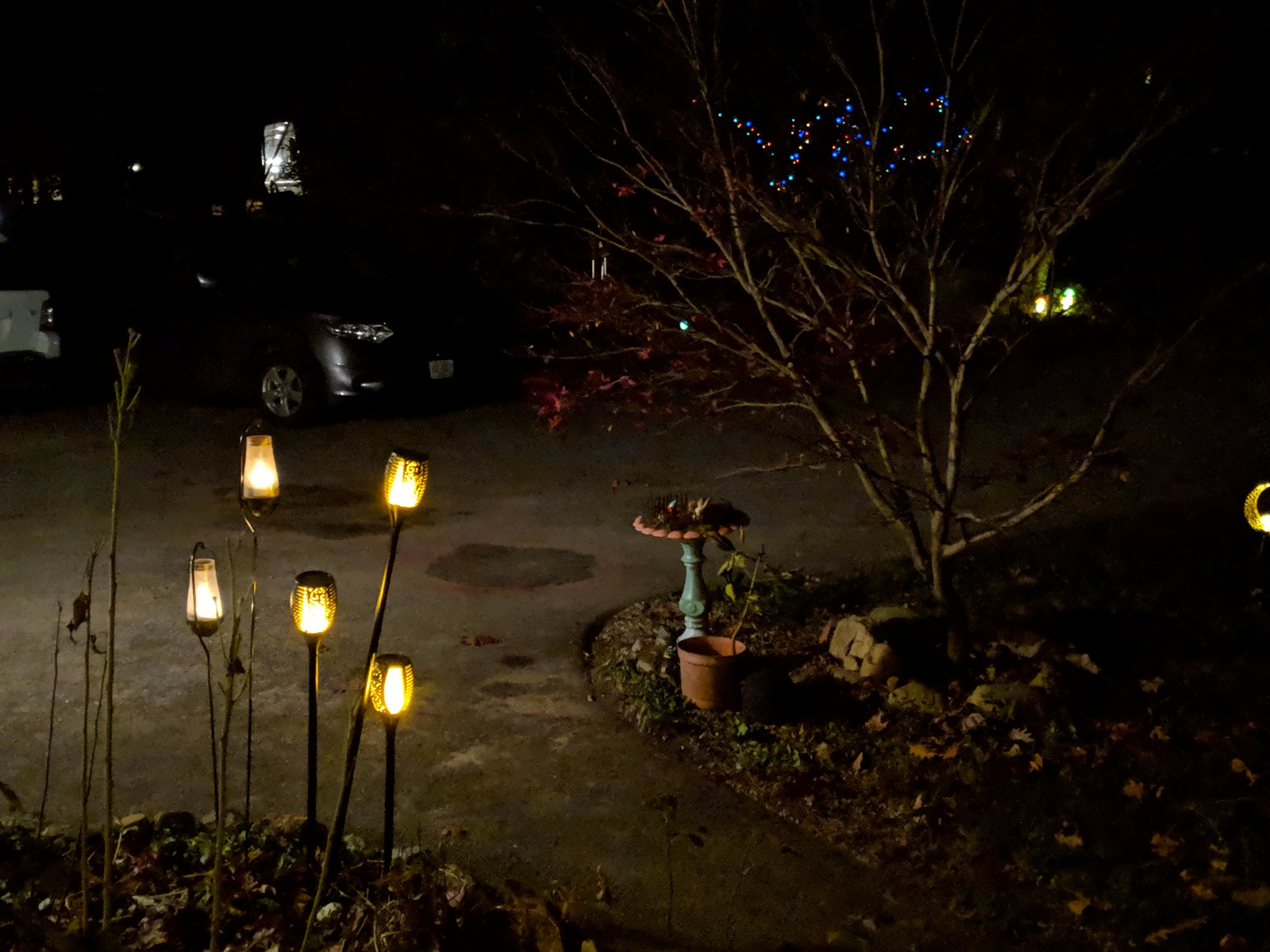 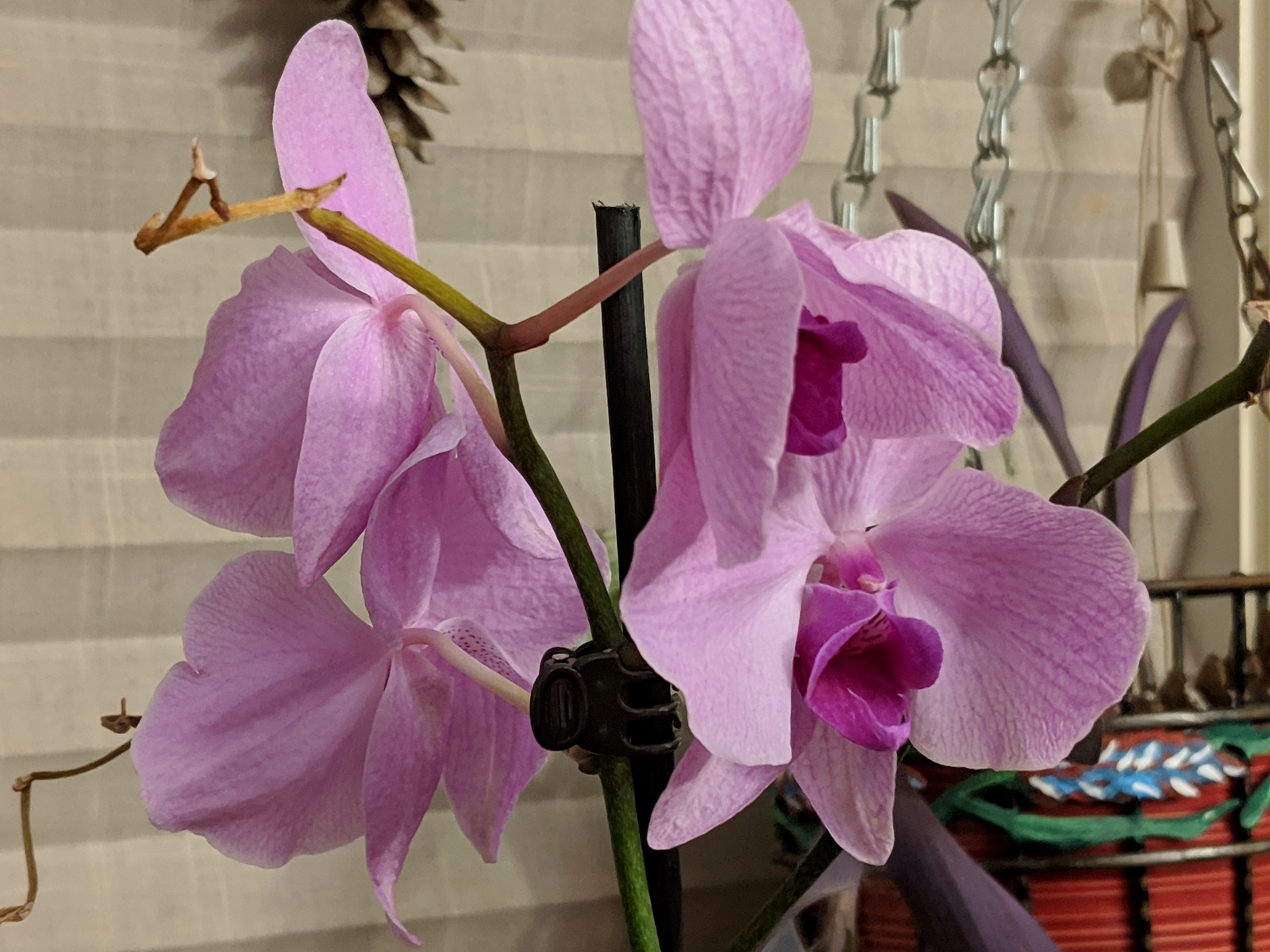 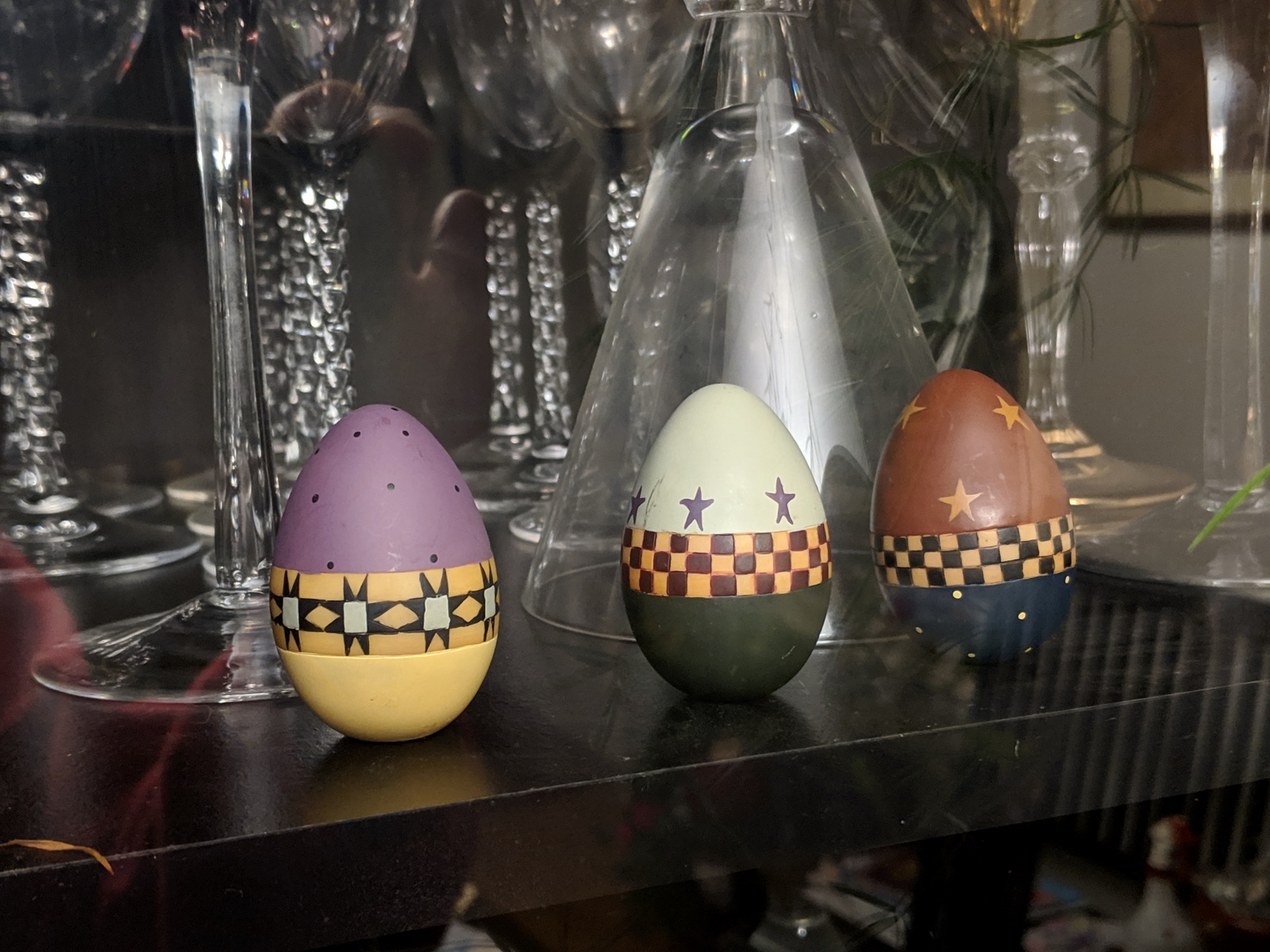 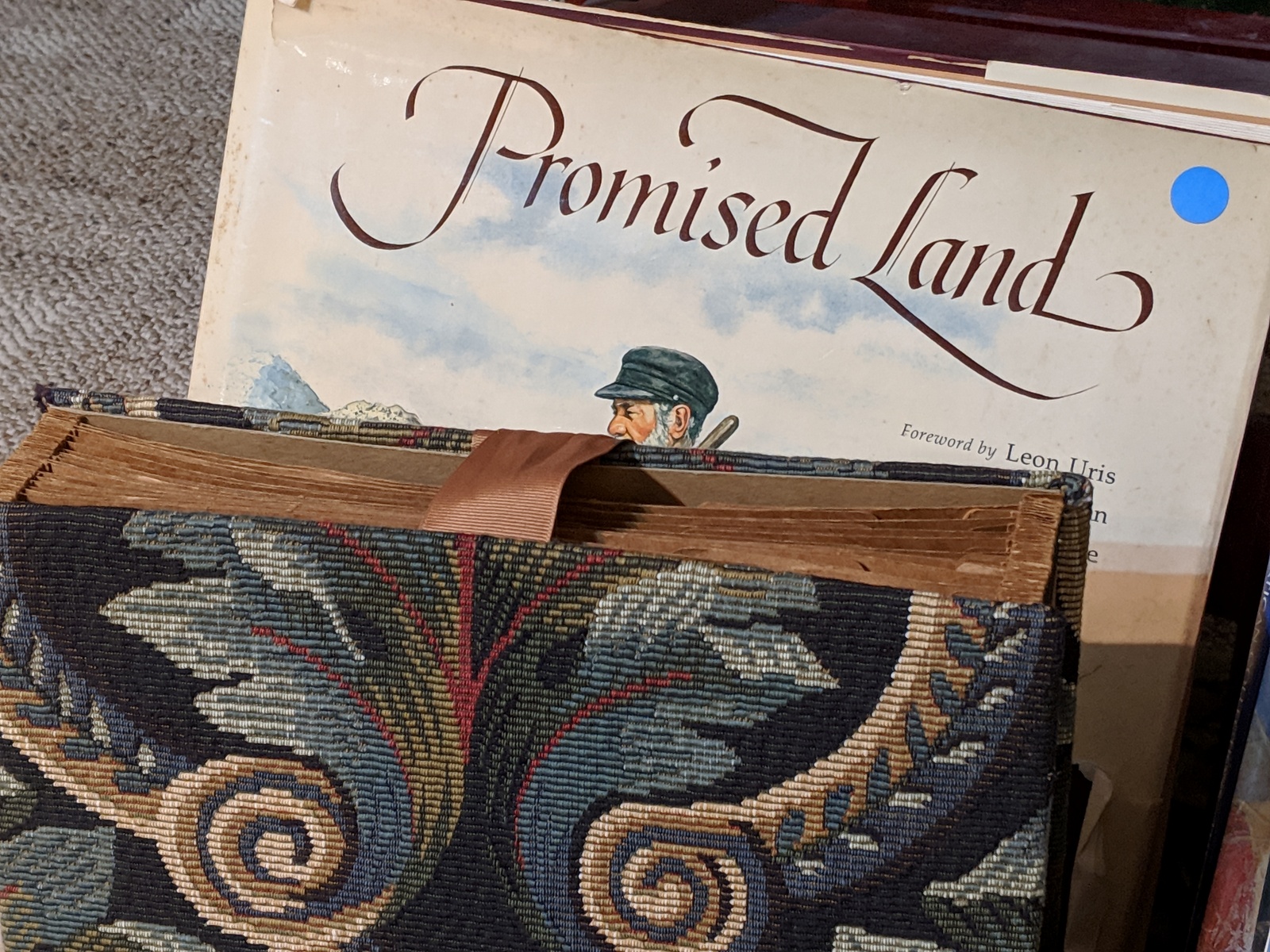 I Have Finally Succumbed & Agreed To Get Snow Blower — But It Is Going To Be A Doozy!

I LIKE SHOVELING SNOW. It is great exercise. I like being out in the snow. If I am not shoveling I would be walking in the snow for 1-hour, and I would rather shovel since it is better exercise … and I am saving both energy (as in driving an engine) and money.

But, then I slipped and completely, totally tore my quadricep tendon while shoveling snow on Thursday, February 28, 2019. I needed major knee surgery and was on crutches for six (6) full weeks.

I had slipped and fallen, shoveling snow, nine or ten years ago, and broken a rib.

So, now it was total vindication. The dithering old goat — i.e., I — was going to slip again and kill himself shoveling snow.

To be honest, the knee injury affected my psyche. At 65 it was my first real injury! Yes, I had broken my hand, dislocated my thumb and broken most of my finger joints through rugby, skiing and cricket, but none of those had been major. I was not sidelined. I was not disabled. But, after the knee injury I was a cripple for 6-weeks and I hated it. I vowed to come back fitter than ever before — not that I wasn’t fit before. But, since my surgery I have lost 30 pounds and exercise 40% more. I try to average 6 miles of walking/running a day. I also try to get in 23-minutes of stationary bike riding to keep my knee flexible. So, I am in better shape to shovel snow than everbefore — and I have shoveled snow for at least 25-years.

But, slipping scares me. SMILE.

So, I succumbed. But, if I was going to get one, it had to be superlative. I was not going to mess around.

If I was NOT shoveling snow, I would have to walk my 4.5-miles in the morning. So, I would only have, at most, 30-minutes to clear the drive. So, I was not going to spend time and energy pushing, pulling and hauling a puny little machine. I was going to boss the snow around.

This was about as BRAWNY as I could find. Three-stage, with Track Drive and power steering. I think it can throw snow 200′!

Well I will, of course, keep you posted.

Home Depot was DESPERATE for the business. I knew how to finagle the best deal. 18-month 0% APR credit with $100 off up-front. SMILE. So, why not get a real good one?